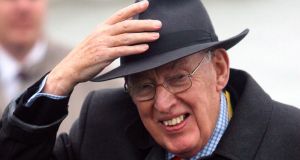 President Michael D Higgins said he learned of the death of Rev Ian Paisley “with sadness”, describing him as a man of “deep convictions”.

In a statement folllowing the former DUP leader’s death at the age of 88 today, President Higgins said Dr Paisley’s early career was characterised by an uncompromising position of a constitutional kind.

“Irrespective of one’s political perspective, Dr Paisley was undoubtedly a man of immense influence on the contemporary history of this island,” he said.

“However, his embracing of the change necessary to achieve a discourse that might lead to peace was of immense significance, as was his commitment to building relationships in support of that peace.

“Having sent a representative to my inauguration, Sabina and I were happy to welcome him and Eileen to Áras an Uachtaráin, where he showed great interest in the history of the institution and the building. I also had the opportunity to speak with Dr Paisley at his last public engagement in City Hall, Belfast in November of last year.

“I convey my sincere sympathies to Baroness Paisley and to his sons and daughters Ian, Kyle, Rhonda, Sharon and Cherith on their loss, as well as to Dr Paisley’s friends and colleagues within politics and the faith communities.”

Taoiseach Enda Kenny described Dr Paisley as “a major figure in the history of these islands”.

Mr Kenny said he had the “pleasure of meeting and talking to him” in recent years.

“ I know that he treasured the peace and friendship that he had lived to see, and helped to build, between our traditions.

“His devotion to his faith and to the Unionist people of Northern Ireland was deep and unshakeable.

“In time, history will come to a fuller judgement of his long career.

“And, while he was of course a divisive figure, his greatest legacy will be one of peace. On this day, our thoughts are with his family and our sympathies go to the many thousands of people who were devoted to him during his life.”

Speaking in Milan at a meeting of euro group finance ministers, Minister for finance Michael Noonan said the country owed Rev Paisley a lot, in terms of the political risks he had taken to put the Belfast Agreement in place.

“He had a very long and interesting political career and where he started wasn’t where he finished.

“I think the country owes him quite a lot in terms of the way he took a lot of political risks to finally put the Good Friday agreement in place and work towards the peace process with John Hume in particular.”

He extended his sympathies to the Paisley family, adding that Ian Paisley junior had visited him a number of times in Dublin on constituency issues that he felt the Irish Government could be helpful on.

Minister for Foreign Affairs Charlie Flanagan said Dr Paisley was a man of strong principles and a deep religious conviction who was the voice of many people from his tradition.

“He was admired by many for his resolute spirit and his strength of purpose. These qualities were very much to the fore when he did what was once unimaginable and, together with Martin McGuinness, brought nationalist and unionist parties together in partnership government in the Northern Ireland Executive,” he said.

“For over half a century, he was central to the politics of Unionism and Northern Ireland. For much of his life, he was an implacable opponent of all forms of Irish nationalism. In recent years however, he recognised the need for an accommodation and a mutual respect between all those who share this island.

The journey he travelled, in many ways, encapsulates the triumph of the peace process and constitutional politics, and the futility of so much of what came before.

“He worked very closely with former taoiseach Bertie Ahern in bringing the Good Friday Agreement to fruition,” he said.

“Dr Paisley did important work in laying new foundations for peace, in securing investment for Northern Ireland and in helping build co-operation and respect between both parts of this island. Once he made up his mind on an issue there was no rowing back. He always had a very strong work ethic and worked tirelessly for his constituents for many decades.

“In any objective analysis of Ian Paisley, due consideration will be given to his work for peace and a new dispensation on this island.”