Government to seek special status for North after Brexit 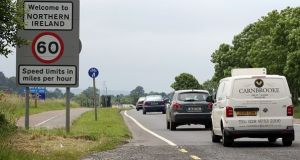 Minister for Foreign Affairs Charlie Flanagan has given the clearest signal yet that the Government is seeking a special status for Northern Ireland as a solution to the threat of a hard border on the island post-Brexit. File photograph: Getty Images

The Government will seek a “legal recognition of the unique status of the North and the circumstances on the island” as part of the arrangements when Britain leaves the European Union.

Speaking to The Irish Times yesterday, Minister for Foreign Affairs Charlie Flanagan gave the clearest signal yet that the Government is seeking a special status for Northern Ireland as a solution to the threat of a hard border on the island.

Today the Government will decide to set up an “All-Island Civic Dialogue”, to be held in Dublin on November 2nd, which will involve political parties, civic organisations, trade unions, business groups and non-governmental organisations from North and South.

Taoiseach Enda Kenny will bring a memorandum to Cabinet today on Brexit issues in which he will outline the proposal to Ministers.

Government sources say that preparations for Brexit are accelerating in the wake of the announcement by British prime minister Theresa May that she will formally begin the process of leaving the union by invoking article 50 of the Lisbon Treaty before the end of next March.

Contacts with the Northern Ireland Executive are likely to intensify before the next meeting of the North-South Ministerial Council, which includes all the ministers from the Dublin Government and the Northern Executive, in Armagh on November 18th .

It is understood that Northern Ireland First Minister Arlene Foster, who previously rebuffed Mr Kenny’s suggestion of a North-South forum to discuss Brexit , has not been specifically briefed on the details of the Taoiseach’s proposal.

DUP MP Jeffrey Donaldson was yesterday critical of Mr Kenny’s unilateral suggestion of a forum last summer, ascribing it to “domestic political reasons”. However, he stressed the administrations in Dublin, London and Stormont were “working in a common cause” in seeking a special status for Ireland in the post-Brexit world.

“What we’re really looking for is a special deal for the island of Ireland which enables free movement of goods and people on the island, and preserves the institutions we’ve created under the various agreements,” Mr Donaldson said. “The people we’ll need to convince are the EU.”

Mr Flanagan also stressed the need for the Brexit negotiations to take account of the Belfast Agreement, under which all citizens in the North are entitled to an Irish, and therefore an EU, passport.

“The Good Friday Agreement is a document that is going to have to be on the table at the negotiations,” he said.

Mr Flanagan has been engaged in intensive diplomacy with his EU counterparts in recent months and he said the “unique position” of the North was “appreciated”. However, senior officials say it will be a considerable challenge to transform that into a legally binding agreement that recognises a special status for the North.