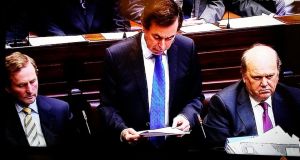 Today’s new information increases pressure on Government and on Minister for Justice Alan Shatter in particular.

For a little while today, it looked like the Government may just have started drawing a line under the justice controversies that have bedevilled it for over two months now.

Unusually, a press release was very quickly released after the weekly Cabinet meeting disclosing that Mr Justice Nial Fennelly of the Supreme Court has been appointed as the head of the Commission of Investigation that will inquire into the routine recording of phone calls to and from major Garda stations over a period of 30 years.

It was not expected that the Government would be in a position to draw up the terms of the reference at its meeting today, but the reference that the Commission should “examine all matters of public concern” indicated that there was a willingness that the terms would be wide rather than narrow or constricted.

The Government also provided an update on the civil case being taken by Ian Bailey, on the progress in establishing a new authority and on the formation of a new Cabinet subcommittee on justice and policing.

It might not be the complete package, but at least Ministers could demonstrate that tangible action was being taken on foot of the controversies. It would help Government Deputies to be on a stronger footing when countering the Fianna Fáil motion of no confidence in Minister for Justice Alan Shatter, the two-day debate on which commences tonight in the Dáil.

But no sooner had the Government extricated itself from the ropes than it walked across the ring and straight into a haymaker that nobody had seen coming.

It emerged that the Cabinet was told this morning of another related development – that privileged conversations between 84 prisoners and their lawyers had been inadvertently recorded. When the Taoiseach disclosed it during Leaders’ Questions this afternoon, it suggested that the crisis was deepening rather than receding.

As yet, details have not been given as to how the recordings were made and how they were discovered. There is also the claim that the recordings were ‘inadvertent’. How could that possibly be? There will be intense pressure on the Government and the prison services to explain in the fullest possible fashion how that came to be. There are also serous potential repercussions. Among the principles that are held dear in the Irish legal system is that conversations between lawyers and their clients are wholly privileged.

Expect this latest twist to be included in the terms of reference of Mr Justice Fennelly’s Commission over the next week to 10 days.

But that’s the rub for the Government. The issue won’t be going away any time soon. There are already two inquiries ongoing (the Cooke and Guerin inquiries) and neither will be reporting back until the end of April. Even at this juncture, it looks likely that the issue will again dominate domestic politics this week.

And while Alan Shatter will safely survive the motion of no confidence when the vote is taken tomorrow, he and his Government colleagues are still not making much headway in disentangling themselves from the briars.