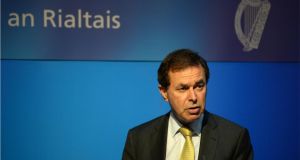 The Government has ruled out creating a redress scheme for former residents of the Bethany Mother and Child Home and stated that they will not be able to access existing compensation funds.

Minister for Justice Alan Shatter, who briefed Cabinet colleagues on the matter today, said he understood the decision would be “disappointing” for the former residents.

Mr Shatter said the Government was willing to look at developing a memorial and making records relating to the Protestant-run home available.

“I understand this is disappointing for the group involved but the Government has taken its time and arrived carefully at this decision,” he said.

The Bethany Home Survivors Group said an offer of “modest funding” towards a memorial and making records available was “an insult” and that it would continue its campaign for justice.

The Protestant-run residence for unmarried mothers and their children operated between 1921 and 1972, initially in Blackhall Place, Dublin, and later in Rathgar. Some 219 graves of children who died there between 1922 and 1949 were found in Mount Jerome Cemetery in Harold’s Cross, Dublin, in 2010.

About 20 former residents are known to the Bethany Home Survivors Group, which stresses that the financial implications of their inclusion in a redress scheme would be relatively small.

In a statement, the Government said a view expressed by Minister for Education Ruairi Quinn two years ago, that there was no basis to revisit a decision by the previous government not to include the Bethany Home within the Residential Institutions Redress Scheme, had been confirmed.

Mr Shatter and Minister for State for Equality Kathleen Lynch met survivors of the home in April to hear about their experiences. The Government statement added that, at the meeting, the Bethany Home Survivors Group indicated that the Magdalene Laundry Scheme was not appropriate to them.

A Government spokesman said a comparison drawn between the Bethany Home and Magdalene Laundries “was not accepted.”

Asked whether the decision could be seen to be any way sectarian, he added that the decision was based on an examination of the human suffering involved and no other criteria.

It was argued in Government circles that there was a difference between Bethany Home as a place of refuge and the Magdalene Laundries, where women were incrcerated and the obliged to work.

A letter to the survivors group, dated today and signed by Mr Shatter and Ms Lynch, says there is no plan to introduce a redress scheme for “those who were in mother and baby homes”.

Derek Leinster of the Bethany Home Survivors Group argued this evening that Bethany was not a mother and baby home. “Mothers did not bring their babies home and many children arrived there with no mother at all,” he said.

“We have proved that the state was responsible for death and neglect at the home and that it was more interested in maintaining sectarian peace between Roman Catholics and Protestants than in child welfare.”

Sinn Féin member resigns over claims party is trying to ‘silence’ her 20:16
Gaiety Theatre projectors to be auctioned off next week 20:05
Garda launches coastal operation in Sligo and Leitrim to tackle crime 20:16
Early batch of child flu vaccine to expire within weeks after poor uptake 19:24
Keep up momentum to support older people in their homes, urges Alone 19:13