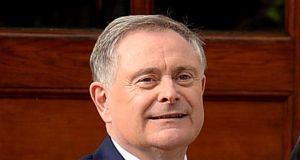 Minister for Public Expenditure Brendan Howlin: “We had to make contingency plans for the collapse of the euro at that time. They were scary, scary times.” Photograph: Cyril Byrne/The Irish Times

The Economic Management Council drew up contingency plans for the collapse of the euro when the single currency entered its most serious period of crisis, Minister for Public Expenditure Brendan Howlin said.

In an interview with The Irish Times ahead of the Labour Party conference, Mr Howlin publicly disclosed for the first time that “elaborate and detailed” plans were made for a euro collapse.

He indicated contingency plans were in place for the re-introduction of the punt and said there were measures to increase security at banks.

The preparations were made when Italy was at the centre of the euro zone debt crisis towards the end of 2011, months after Fine Gael and Labour took office.

Attorney General Máire Whelan was also involved in drafting legislation to be used in such an emergency scenario, he said.

Mr Howlin said the EMC has played a key role at sensitive times during the Coalition’s term of office, specifically citing negotiations on the liquidation of the Irish Bank Resolution Corporation, formerly Anglo Irish Bank, and the promissory note deal in 2013.

“Early on in our time there was a real existential threat to the euro, when Italy was under enormous pressure,” the Wexford TD said.

“We had to make contingency plans for the collapse of the euro at that time. They were scary, scary times. That was handled by a tight group of ministers.

“There were a number of things done, they were all anchored in the EMC. The Attorney General had to look at legislation. Key finance people, public expenditure people were involved in discussions in relation to that.”

When asked if the plans included a re-introduction of the punt, Mr Howlin said: “All avenues were considered.”

When asked if measures were put in place to provide increased security at the banks, he said: “Yes, all of that.”