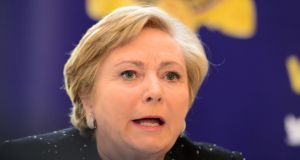 The Government has identified 26 locations to house thousands of incoming refugees, Minister for Justice Frances Fitzgerald has confirmed.

Ireland has committed to house 4,000 refugees over the next two years in response to the crisis in Syria.

Ms Fitzgerald said 90 parcels of land were identified as potential sites across the country but only 26 have been deemed suitable by the department.  However, the precise locations have not been confirmed by the Department.*

On the suitability of the accommodation she added: “There is a standard here. Some countries are building tented villages and using school gymnasiums but they are dealing with thousands.”

To date, 129 refugees have already arrived from Jordan and Lebanon this year while a further 62 were expected to arrive from Syria before the end of the year.

The department’s taskforce says refugees will stay in an initial reception centre for up to 10 weeks before moving to their permanent homes.

Ms Fitzgerald also revealed there would be a stronger focus on deportations in 2016 to prioritise genuine refugees amid concerns the asylum system is being abused.

The Minister said too that there was a need for order on the asylum system to ensure the country has a balanced migration policy.

“We have to assess if people are genuine refugees and I think we will focus more on deportations and people who are here illegally.

“The whole of Europe is going to do that but you have to balance that with a humane system that deals with people quickly,” she said.

Ms Fitzgerald said she is “highly concerned” about the numbers of people seeking asylum in Ireland, in particular from Bangladesh and Pakistan.

In relation to the stronger focus on deportations in 2016 to prioritise genuine refugees she said: “People who are not entitled to be here will be sent back and we will have an effective deportation policy.”

Figures from the Department of Justice show that 3,064 asylum applications were received in the first 10 months of this year, representing a 140 per cent increase on 2014.

Applications from Pakistan are nearly six times more than the total received in 2014, while those from Bangladesh have doubled.

Ms Fitzgerald said the rise in applications appears to be linked to a crackdown in the United Kingdom.

“If people come here and if it is clear they have already been in the UK then they are not refugees – we have to be very clear about that.

“That is not to say that people are not entitled to an assessment but I am concerned there could be abuse.”

Ms Fitzgerald also said there is “huge concern” that women are being trafficked to Ireland and being forced into marriages of convenience.

“Women are being trafficked to Ireland with a view to being forced into sham marriages.

“Those cases will be thoroughly investigated – it is a criminal matter and we have the extra legislation now. That is a huge concern.”