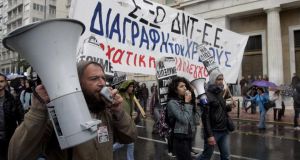 The guiding spirit of official Ireland for the last five years has been Miss Prism. She is the governess in The Importance of Being Earnest and author of a three-volume novel of “more than usually revolting sentimentality”. Its essential principle is, as she explains, that “the good ended happily, and the bad unhappily”. In dealing with the banking crisis, this has been the essential principle of both the last and the present governments. We are the good Europeans and we will end happily because Europe will reward us. And who are the bad? The Greeks, of course. But the Government seems to have forgotten Miss Prism’s addendum to her point about people getting their just deserts: “That is what Fiction means.”


The anti-Greece
In constructing its own sentimental novel of virtue rewarded, the Government went out of its way to position Ireland as the anti-Greece. In doing so, it did not stop short of outright and utterly tasteless mockery of the distress of the Greek people. In December 2012, Michael Noonan joked that he was thinking about ordering T-shirts with the slogan “Ireland is not Greece” printed on them. The previous May, he airily dismissed Greece as a place of no consequence whatsoever for Ireland. “Apart from holidaying in the Greek islands, I think most Irish people don’t have a lot [of connections with Greece]. If you go into the shops here, apart from feta cheese, how many Greek items do you put in your basket?”

As well as being crass, this was rather ungrateful. The truth is that the reduction in the punitive interest rates Ireland was being charged by our gallant allies in Europe for the so-called bailout loans was entirely thanks to Greece. While our lot were doing their best Uriah Heep impressions, the Greeks made it clear that they simply wouldn’t pay interest rates that gave the European Central Bank substantial profits on the back of their misery. The stroppiness worked: the ECB and EU Commission capitulated and the interest rates were cut – saving Ireland many billions of euro. Our Government proceeded to claim credit for the positive consequences of Greek gumption.

The mockery of the Greeks was necessary, however, to make a point: that Greek obstreperousness would be punished in the end. The Greeks were the mad pyromaniacs threatening to burn down the euro zone house. The Irish were the good Europeans who burned down their own house rather than allow the contagion it contained to spread to Europe. But just as there is a God who will deal out justice in the long run, the even greater god of the markets would ensure that we ended happily and they ended unhappily.

So Greece defaulted on €100 billion of its real sovereign debt. Ireland, meanwhile, insisted it would pay what Noonan repeatedly called “every red cent” of the money borrowed by private banks from bondholders – including the bonds held by those who had gambled on Anglo Irish Bank and Irish Nationwide. This Irish goodness was justified by the usual methods – the threat of hell and the pro- mise of heaven. Noonan told us that if we had even a partial, controlled and targeted default on the most egregious parts of the banking debts, we would end up like Argentina, where the middle classes were “searching the rubbish bins to try and feed their kids”; or like Russia, where “elderly people died by the hundreds when they defaulted”. That’s what happens to the bad defaulting people. The good “every red cent” people, on the other hand would enter, or rather re-enter, the international financial markets that would reward their virtue by lending them money.


Frantic rush
Last week, a funny thing happened on the way to the Acropolis. The bad, reckless Greeks, the mad shower who had defaulted on €100 billion of debt, went back into those markets, looking to raise a modest €3 billion. What happened? They were nearly trampled in the frantic rush to give them money. Investors offered Greece not €3 billion but €20 billion – at a relatively low rate of 4.5 per cent. It turns out that the markets don’t really care about the Greek default. They care about future profits and ever since ECB president Mario Draghi promised to do “whatever it takes” to save the euro, they have been confident their money is safe – even though Greece is still in desperate trouble.

And meanwhile what of good little Ireland? It is now 18 months since the Government allegedly achieved the historic breakthrough of having German chancellor Angela Merkel acknowledge that Ireland is a “special case”; and 22 months since the “seismic” EU promise to break the link between Irish sovereign and banking debt. We seem further away than ever from any serious attempt to fulfil those promises. In the absence of any sign of our reward for being so cravenly good, the Government is reduced to fibbing. Last week, Brendan Howlin brazenly told the Dáil that “we have torn up the prom note”, meaning the promissory notes for Anglo and Nationwide that have been fully incorporated into sovereign debt. And that, as Miss Prism would say, is what Fiction means.