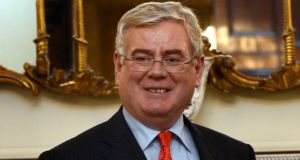 Tánaiste Eamon Gilmore and British ambassador to Ireland Dominick Chilcott have signed the agreement establishing a single maritime boundary between the Exclusive Economic Zones (EEZ) and continental shelves of Ireland and the UK. Photograph: Brenda Fitzsimons

Tánaiste Eamon Gilmore has signed an agreement finalising a maritime boundary between the Irish and British offshore zones.

Mr Gilmore and British ambassador to Ireland Dominick Chilcott have signed the agreement establishing a single maritime boundary between the Exclusive Economic Zones (EEZ) and continental shelves of Ireland and the UK.

The agreement brings legal certainty to boundary issues and is designed to improve protection of fisheries, the marine environment and marine biodiversity and removes a potential obstacle to the development of offshore renewable-energy projects.

“This agreement resolves legal uncertainty on boundary issues with the UK and establishes a clear framework for the Government’s efforts to encourage and facilitate the sustainable development of our marine resources in the seafood, oil and gas, renewable energy and biotechnology sectors,” said Mr Gilmore.

The EEZ lies above the continental shelf and stretches from 12 nautical miles offshore out to a distance of 200 miles.