Genteel start to election campaign for Burton in Clontarf 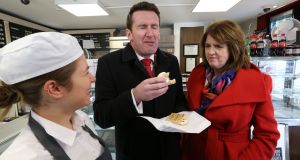 Tánaiste Joan Burton had a genteel start to her election campaigning on Wednesday afternoon, with Minister of State at the Department of Justice Aodhán Ó Riordáin in Clontarf, Dublin.

Asked why she began in Clontarf, the Tánaiste said “for Aodhán”.

Campaigning began with a crash bang, when one of the many journalists who squeezed into the tiny “To Russia with Love” charity shop accidentally knocked over a piece of glass.

As the hapless journalist tried to kick the shards out of the path of oncoming reporters, Denise Deegan, founder of the charity, said the piece was worth €1,000 and, to much laughter, told him he’d have to pay.

Deegan took the opportunity to talk about her work in Dublin with a disadvantaged school and got a plug in for a local charity fundraiser later this month, Clontarf Does Strictly.

Someone suggested Ó Riordáin could have taken part.

“I did the boxing before,” he said. “It was politicians against each other.”

He said he was up against a Fianna Fáil councillor.

“I hit him on the head a few times and he fell over.”

Deegan said they were already full up.

Outside on the street, polite passersby shook hands with both politicians. Three gardaí, who were keeping an eye on proceedings and on the Tánaiste’s car, nodded their approval; there would be no Jobstown lock-in here.

All of the local stores were on standby in case of a visit, but things were not quite ready in Spar.

Ó Riordáin and Burton made their way to the tills half way down the store, with television cameras and reporters trailing after them. They shook hands with two young lads behind the counter, there was an awkward pause and then they left, posse in tow. They had just entered Doyle’s Pharmacy, when the manager of Spar, Gus O’Hara, sprinted past the media, cursing under his breath, and persuaded them back into his shop.

A prominent member of the Convenience Stores and Newsagents Association, O’Hara was not going to waste a chance to complain about the proposed Public Health (Alcohol) Bill 2015. The Bill requires the structural separation of alcohol products in stores such as O’Hara’s.

Waving to shelves of wine at the rear of his store, he told the two politicians he would have to put doors on the front of the shelves, so that the wine could not be seen. That was all very well for cigarettes, but not for wine, he said.

“You’d have to open the doors to purchase the wine,” he politely explained, showing them a drawing of how it would look. It would make his customers feel as if they were doing something wrong.

Burton suggested his association should talk to the health committee about its concerns.

“The other thing, by the way, with any legislation that’s not finished by the time the Dáil goes into recess for the general election, it has to come back in subsequently, there is definitely an opportunity then,” she said.

The visit to the chemist was completed, before a quick hello in Rocco Boutique.

Then on to Thunder’s Bakery, where Ó Riordáin sampled a coffee slice. But much to the disappointment of photographers, he asked for the cake to be cut in two, avoiding a cream-squirting moment, and managed to eat half without mishap. He gifted the other half to a bemused child outside on the avenue.

In the Butler’s Pantry, bite-sized smoked salmon on brown with cucumber pickle was sampled, before crossing the road again to visit Moloughney’s Restaurant.

There was conversation with three friends lunching there, who raised mannerly concerns about local flood defences, before the party sat down for a late lunch of salad, soup and wraps.

Outside, a party member was up a ladder, hanging a poster of Ó Riordáin, optimistically above a no right turn sign.