Garda Commissioner Martin Callinan has tendered his shock resignation his morning following the deepening crisis over the penalty points controversy.

Garda Commissioner Martin Callinan appears befor the Committee of Public Accounts on January 23, 2014, and syas he finds the actions of whitstleblowers 'quite disgusting'. 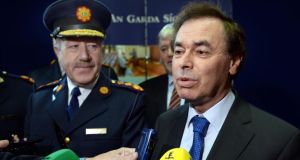 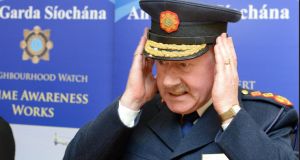 Minister for Justice has this evening paid tribute to Garda Commissioner Martin Callinan who announced his resignation earlier today.

Mr Callinan said the decision was made in the best interests of the force and his family. In a statement Mr Callinan said recent developments were “proving a distraction” to the work carried out by An Garda.

“In the best interests of An Garda Síochana and my family, I have decided to retire. I felt that recent developments were proving to be a distraction from the important work that is carried out by An Garda Síochana on a daily basis for the citizens of the State in an independent and impartial manner.”

Mr Shatter said in a statement tonight: “As Commissioner and throughout his very distinguished service in the Force he has made an enormous contribution to fighting crime and I believe that this contribution will be seen as a legacy of which he can be very proud and for which the community he served are in his debt.

“The high reputation of An Garda Síochána has been gained down through the years through people’s experience of dealing with members like Martin Callinan, often at times of great difficulty. I believe, at these challenging times for the Force, the men and women who serve in it will continue to enjoy the respect of the community they serve, often at great risk to themselves.”

In his statement earlier, the Commissioner did not deal any further with the controversies that have rocked his stewardship of the force, but praised his colleagues for serving the people of Ireland.

His statement did not reference the issue of taped phone calls at Garda stations which is now the subject of a commission of investigation.

“The last four years have seen major changes in An Garda Siochana, which were always done in the best interest of the community for whom we do our job,” Mr Callinan said.

The move was not anticipated by even those closest to him in the Garda. Mr Callinan tendered his resignation to Minister for Justice Alan Shatter this morning, before the start of the weekly cabinet meeting.

Government sources this morning said they were “stunned” by the news. While Mr Callinan notified Mr Shatter of his resignation, sources said the issue of a Garda oversight body still had to be addressed.

His shock move follows a deepening crisis over the penalty points controversy which has effectively split the Cabinet.

The Cabinet discussed the matter at its weekly meeting.

Mr Callinan had been under pressure by the deepening rift in Government over his use of the word “disgusting” to describe the Garda whistleblowers when he appeared before the Public Accounts Committee.

Tánaiste Eamon Gilmore had expressed confidence in Mr Callinan, as had Mr Varadkar, even though he said the Commissioner was not above criticism.

Mr Callinan had become embroiled in numerous controversies in recent months, such as his handling of the penalty points and whistleblowers affair as well as the fallout from the Smithwick Tribunal report.

Mr Callinan had been due to retire on age grounds last August but was offered a two-year extension to his term by the Government, which he accepted.

He was to retire in August of next year when that two-year period had expired but has decided this morning to tender his resignation to Mr Shatter.

As recently as the end of last week those close to him were insisting there would be no apology from him for the language he used and that he had no intention of issuing any further statement about the matter unless asked by Government to do so.

At the weekend it emerged he was considering making another statement to try and bring the matter to a close.

However, while that was expected as early as yesterday, well in advance of today’s Cabinet meeting, it never materialised.

Mr Callinan effectively retires now and is entitled to a full pension.

His departure leaves significant gaps at the head of the force, due to inaction by Mr Shatter in recent years in filling senior posts that many within the force were very surprised have been left vacant.

For example, while the force is headed by a commissioner, there are two posts of deputy commissioner just below that. But one of these has been vacant for a prolonged period.

Mr Callinan’s resignation means that two of the three posts at the top of the Garda force are vacant, with Deputy Commissioner Noirín O’Sullivan now expected to take on his position of commissioner on an interim basis.

She, along with Assistant Commissioner John O’Mahoney, was regarded as the front runners to be the next garda commissioner when Mr Callinan’s tenure was due to come to an end next August.