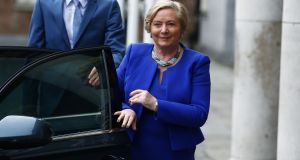 Tánaiste and Minister for Justice Frances Fitzgerald: new Bill is being drafted to provide additional powers to target the proceeds of crime. Photograph: Brian Lawless/PA Wire

Tánaiste Frances Fitzgerald is to seek Cabinet approval today for new legislation to allow gardaí to intercept the emails and social media accounts of criminal suspects.

Ms Fitzgerald is expected to request consent to make a number of announcements in the area of organised crime.

The Minister for Justice is to update and expand two outstanding Acts to give the Garda new powers.

Under the proposed amendments, gardaí will be allowed to intercept the emails, social media and instant messages of suspected terrorists and organised criminals.

The proposed legislation will stretch to WhatsApp, Viber, Facebook and emails.

Ms Fitzgerald’s proposals seek to address the loophole and close the gap.

A Department of Justice source said the Tánaiste was aware of the “very sensitive” need to strike a balance between effective investigatory powers and fundamental rights.

The proposed amendments will address any concerns in this area.

The Minister for Justice has made a series of legislative changes due to a bitter dispute between two gangs.

There have been seven murders as part of the Kinahan-Hutch feud – one last year in Spain and six in Ireland this year.

Gardaí are still trying to determine if a man who was shot dead in the south inner city last week is linked to the Kinahan-Hutch gangland feud.

A new Bill is being drafted to provide additional powers to target the proceeds of crime.

This will include providing the Criminal Assets Bureau with a power of administrative restraint which will allow it in certain cases to freeze immediately assets which are suspected to be the proceeds of crime.

The measures will also aim to assist co-operation between Ireland and its European counterparts in respect of mutual legal assistance.

The Government is also establishing an inner-city taskforce to examine difficulties in the area.

However, its terms of reference have still not been decided.