State Papers 1990: Mallon described by senior official as ‘not at his best on legal matters’ 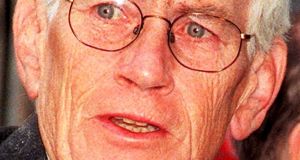 Official criticism of Seamus Mallon of the SDLP emerges in this year’s files released by the Public Record Office in Belfast. The context was a report by an official from the Northern Ireland Office, SA Marsh, of the political affairs division, from a debate at the SDLP conference in November 1990 on the administration of justice.

According to the report, Mr Mallon, then deputy leader of the party, spoke with “passion” during a debate on a bill of rights for Northern Ireland, but said that such a measure could not co-exist with the current emergency legislation. In his view, the administration of justice was more fundamental than politics, while a political settlement in the North would be impossible to achieve without resolving the issue of confidence in the system of justice and security.

Peter Bell, a senior official at the Northern Ireland Office, said of the reported speech that Mr Mallon was “not at his best on legal matters”.