For those relishing the election campaign, we say: enjoy

Inside politics: Kenny ‘dying for road’, announces election on Wednesday 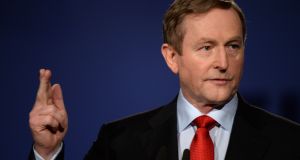 While the Taoiseach has yet to confirm it, polling day is widely expected to be Friday, February 26th. Photograph: Dara Mac Donaill/The Irish Times

When asked in recent weeks whether he was looking forward to the election campaign, one of Enda Kenny’s stock responses has been: “I’m dying for road.”

Well, road he shall have. On Kenny’s orders, the 2016 general election officially starts today.

While the Taoiseach has yet to confirm it, polling day is widely expected to be Friday, February 26th.

Technically, the shortest campaign in the history of the State gets underway tomorrow. Realistically, it has been unde rway for quite some time.

Kenny himself has called the Fine Gael parliamentary party room a public forum and, as was the likely plan, what little details of the manifesto that had yet to be leaked have found their way into the newspapers, including our own lead.

Some TDs went into the final meeting expecting a blood curdling, table thumping battle cry from Kenny; but they were left disappointed.

The Taoiseach told them “exciting times” are ahead and that it is important to, er, keep the recovery going.

In The Irish Times, Marie O’Halloran charts the gradual reduction of the coalition’s majority during this term, with all of those running again hoping they will make it back to the 32nd Dáil.

Also in The Irish Times, Miriam Lord writes Enda gets physical in the fiscal space.

The latest speculation is Kenny will drop the hammer on the 31st Dáil quite early this morning, around 9.30am.

When he does, irishtimes.com will be here throughout the day and for the entire campaign with comprehensive election coverage, analysis and scene setters for the weeks ahead.

To those about to campaign: we salute you.

For those, like ourselves, who are relishing the great spectator sport of politics as we decide the course of our country for the next five years: enjoy.