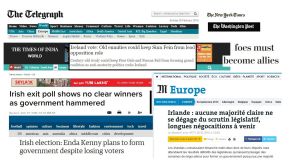 International media has reacted to the Coalition’s heavy losses in the general election.

International media organisations have been watching the Irish election closely and reports have focused on the poor performance of the outgoing Coalition.

The Guardian carried a report on Enda Kenny’s comments that he is committed to remaining Taoiseach, despite his party being “battered by unexpected losses”.

In a background article, the paper says Ireland has been “fighting to plug the gap in the nation’s finances” and meet the demands of the IMF bailout.

“Its economy has the current highest growth rate in the EU (7 per cent) and falling unemployment,” it says.

It also carries comments from former Labour leader Eamon Gilmore, who reacted to the Labour Party’s performance in the election so far. He said the loss of voters “was a result of (Labour) being prepared to take hard decisions during its time in office”.

After initial counting, the paper said: “Ireland could be on course for a historic coalition between two longtime political foes.”

The article says a possible coalition between the two parties would be fraught with difficulty, citing “leading Irish lawmakers” including Simon Coveney.

The report says Bertie Ahern, a former taoiseach who is “considered a great coalition negotiator” says forming the next process will be a “unusually long, gruelling process”.

In a report based on early tallies and statistics from an Irish Times Ipsos MRBI poll, the New York Times carried the headline: “Early Tallies Show Irish Voters Rejecting Government”.

The report said: “. . . it is already certain that the governing coalition will lose too many seats to retain power, with the minority Labour Party suffering the highest casualties.”

Following the piece with live updates, the paper commented on the various TDs winning seats, including Kerry’s Michael Healy-Rae.

“Boisterous supporters lifted the lawmaker into the air, his trademark farmer’s cap somehow staying on his head, as they sang his campaign song: ‘Make your vote and pray, that he goes all the way! He’s flat to the mat with his black cap, and there’s no time for tae (tea).’”

A report by the Telegraph looked at the initial votes from the view of Gerry Adams and Sinn Féin.

“Old enmities could keep Sinn Féin from lead opposition role”, was the headline, alluding to Fine Gael and Fianna Fáil’s continued rejection of the idea of a coalition at this stage of the count.

“The parties could form a grand coalition to govern Ireland,” the article said, “but are held back by old enmities that date back to Ireland’s civil war and the prospect that such a move would allow Gerry Adams’s Sinn Féin to foment left-right split in Irish politics.”

It reported that the Coalition had “failed to revalidate the joint majority that allowed them to rule the last five years under the shadow of the bailout of 67,000 million euros from the European Union and the International Monetary Fund.

“The Prime Minister has recognised the defeat of the coalition.”

Referring to Fine Gael and Fianna Fáil as the “two enemy brothers of the centre right”, French paper Le Monde also highlights the varied results of the vote and the possible coalition options.

As voting opened on Friday, the paper also carried a piece that said the ballot would come as a form of “rejection of austerity”. It said the Coalition’s economic policies had led to fatigue and tension among the electorate.

The only option for a stable government is a union of “civil war rivals”, according to the Times of India.

If trends persist, the article said Enda Kenny would “become the latest victim of an anti-establishment groundswell spreading across Europe even though his premiership has seen Ireland bounce back from a bailout to become the continent’s fastest growing economy.”