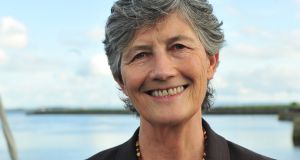 Independent Catherine Connolly was among the new women TDs elected to the 32nd Dáil.

Of the record 35 women TDs who will sit in the Dáil chamber next week, 19 will be newcomers.

Fianna Fáil has finally shaken off its “male, stale and beyond the pale” tag. While its new Dublin deputies are all men, six women TDs will represent the party in Leinster House.

The most female-friendly constituency in the country would appear to be Dublin South-Central, where Sinn Féin’s Aengus Ó Snodaigh is “blessed amongst women” in the company of Bríd Smith (AAA-PBP), Joan Collins (Independent) and Catherine Byrne (Fine Gael).

In the first national election to be held since gender quota legislation was introduced, 155 women candidates put themselves before the people.

Political parties had to implement a 30 per cent gender quota for candidates or have their State funding cut by half.

You would be hard pressed to get any of the successful candidates to describe themselves as “quota women”, however.

New Fianna Fáil TD for Galway East Anne Rabbitte, who was a county councillor, admits she benefited from automatic selection as a result of the introduction of gender quotas but insisted she was “neither a quota nor a token” woman.

Fianna Fáil had a “one man, one woman” policy in the constituency. Ms Rabbitte’s party running mate Colm Keaveney, who beat two other men at the selection convention, did not get elected.

“If we didn’t have gender quotas would Fianna Fáil have ended up with six female TDs? I don’t think so,” Ms Rabbitte said.

The new Fine Gael TD for Dún Laoghaire, Maria Bailey, has been a councillor representing the Killiney/Ballybrack ward on Dún Laoghaire-Rathdown County Council since 2004. Her father, John Bailey, was also elected to the council that year.

She came third in a selection convention at which incumbent deputy Mary Mitchell-O’Connor beat Councillor Barry Ward, following a directive from headquarters that only one candidate be chosen.

Ms Bailey was added later, although she “wasn’t told” if it was anything to do with quotas. She said being a woman in politics had never been a barrier for her, but she could see how it might be for others, and she supports the concept of quotas.

“I think it’s very important that we have female representation in Dáil Éireann and credible, effective women representing our nation.”

In Wicklow, unsuccessful candidate Avril Cronin, who was added to the Fine Gael ticket in December, pulled in a very respectable 2,091 first-preference votes. Her running mates were outgoing TDs Andrew Doyle and Minister of State Simon Harris, and she was competing in west Wicklow with Billy Timmins, who joined Renua.

“For me, in Wicklow, fair enough I am female but Fine Gael always had three candidates and one from west Wicklow. My intentions were never to remove anybody but to maximise my vote and transfer to Fine Gael.”

New Sinn Féin deputy Kathleen Funchion was the party’s only candidate at the Carlow-Kilkenny selection convention and therefore does not owe her election to quotas, although she is in favour of them. “I think it’s important young women with kids get involved in politics... Emmet was three months when I ran in my first election in 2007 and I was pregnant with Finn during the 2011 general election. It can be done.”