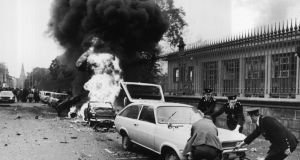 For those of us old enough to remember the terrible day the Dublin and Monaghan bombs exploded, it is hard to believe 40 years have passed.

Despite all the terrible atrocities down through the long years of the Northern conflict, no day saw a greater loss of life than May 17th, 1974 – 34 deaths including a full-term unborn baby.

A third of those killed were young women and girls aged between five months and 22 years. That fateful Friday dawned sunny and bright. In Dublin, the city buses were on strike but people were going about their business as usual.

At 5.28pm precisely, without warning, the first bomb exploded in Parnell Street killing 11 people including an entire family – a young father and mother and their two baby daughters.

Fourth bomb
An hour and a half later, a fourth bomb exploded in Monaghan town claiming another seven lives, including a mother of four and a father of two boys and twin girls, aged just two. The Dublin dead included a young French woman, whose family had survived the Holocaust, and an Italian father of three children.

Nobody has been charged with, much less convicted of, this terrible massacre.

The Garda investigation was wound down within weeks.

It was 19 years before the Ulster Volunteer Force admitted responsibility and only after the broadcast of Yorkshire television’s Hidden Hand: The Forgotten Massacre, in 1993. In its self-serving statement, the UVF insisted it acted alone, contradicting claims made in the programme of security force collusion. Two years later, RTÉ documentary, Friendly Forces? reinforced the YTV programme findings.

Later evidence from security force whistleblowers; the report of Judge Henry Barron’s Independent Commission of Inquiry in 2003 and Anne Cadwallader’s Lethal Allies all point to collusion by members of the Ulster Defence Regiment, the Royal Ulster Constabulary and British military intelligence.

Judge Barron deplored the failure of the British authorities to make original documents available to his inquiry and their refusal to supply other information (on national security grounds) saying they limited the scope of his report.

Since the Barron report, strenuous efforts were made to persuade the British to release the papers. Two motions were passed unanimously by the Dáil in 2008 and 2011, urging them to make the undisclosed documents available to an independent, international judicial figure for assessment. Westminster has ignored them.

More recently, in meetings with the British ambassador, Justice for the Forgotten proposed the documents be assessed in Britain, even in situ if necessary, so that no issue of national security need arise.

A highly respected individual, who it was believed would be acceptable to both sides, was suggested as the assessor.

However, an arranged meeting to move the discussion forward was cancelled by the British side in November and no new meeting was offered since.

After 40 years
Because of this refusal to continue the conversation, the families feel, after 40 years, they can wait no longer.

They have decided, very reluctantly, to take the risky and traumatic path of civil litigation against the British ministry of defence, the PSNI, the Northern Ireland Office and the Secretary of State for Northern Ireland. While we welcome the dawn of improving relationships between Ireland and Britain, such relationships must be based on mutual respect, equality and an honest willingness to deal with difficult issues from the past.

As President Michael D Higgins said before his recent State visit to Britain, it would be wrong to wipe the slate clean. Progress should not depend on forgetting the past.

If our strengthened and warmer relationship with London means anything, it should lead to London acceding to the Dáil’s repeated requests to open the files so all sides can finally establish the truth – and learn from it.

Margaret Urwin is co-ordinator of Justice for the Forgotten

4 Remote-working ‘revolution’ bringing people back to towns and villages