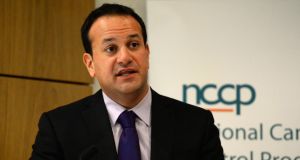 Minister for Health Leo Varadkar said there was a ‘very good chance’ Irish Water would pass next year’s Eurostat test he expected the number of people paying their water charges to rise. Photograph: Cyril Byrne / The Irish Times

The failure of Eurostat to classify Irish Water as an independent entity, was a “minor setback,” Minister for Health Leo Varadkar has said.

Speaking a day after the EU statistics agency published its detailed ruling, Mr Varadkar described the utility as “still a work in progress”.

Eurostat’s detailed note outlines a series of issues which led it to rule that Irish Water would currently fail the test. It points out that “domestic consumers are to be charged at significantly less than cost” for their water.

Responding, Mr Varadkar said there was a “very good chance” Irish Water would pass next year’s Eurostat market corporation test as he expected the number of people paying for the utility to continue to rise.

The “significant and continuous government funding and support to Irish Water” was one of the key reasons why Eurostat says the utility failed the Market Corporation Test.

Mr Varadkar said he believes it is fair that Irish people should pay for the water they use.

“I think Irish Water is the right thing to do. First of all because metering allows us to identify leaks and actually fix them now; it also promotes conservation, people using less water; it’s giving us the revenue stream that we need to invest more in water infrastructure which was neglected for decades,” he told RTE’s Morning Ireland on Friday.

The Minister admitted increased investment in Irish Water was necessary, particularly given the distribution of the €100 water conservation grant.

He added that the Eurostat could be repeated in June 2016.

“It’s still a work in progress. There’s no doubt that Eurostat’s decision was a setback... it’s probably a temporary one though.”

Asked why people should continue to pay for a utility which was financed through central funds, Mr Varadkar said it was “incumbent on Government ministers and Irish Water themselves to continue to make the case as to why this is actually a good idea”.

“What’s gone against us is the way we account for it in public accounts and as I say that can change next year. As you know 48 per cent of people have paid already and I do think that will rise.”

Separately, the Minister cautioned that the State must not become complacent about the economic recovery and that the “over-riding objective” was to sustain the nation’s recovery and be sure not to repeat past mistakes.

“We need to make sure, crucially, whatever we do, we don’t repeat the mistakes of the past,” said Mr Varadkar.

“Any budget package has to be relatively modest in order to ensure that we keep the public finances in order, keep reducing deficit and keep bringing the debt down.

“That does allow some scope for reductions in taxation, to put more money back in people’s pockets and also some additional funds for public services and infrastructure.”