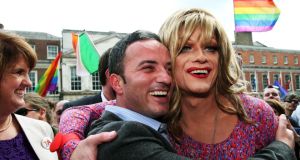 ‘Panti Bliss’ aka Rory O’Neill with John Lyons TD at the Central Count Centre in Dublin Castle, Dublin, where the result of the same sex marriage referendum was announced. Photograph: PA

All the eastern counties have voted in favour of the amendment on same-sex marriage. This is how it played out in the counties:

“It was about more than just marriage - it was about it being ok to be gay,” as Meath voters said Yes to same sex marriage by over 60 per cent across the county.

A total of 74,113 valid papers were counted in two centres - Ashbourne in Meath East and Trim in Meath West - from early Saturday.

Here 24,525 out of the 38,767 voted in favour of the referendum. The results closely mirrored earlier tally figures that saw an urban/rural divide emerging and this was clearer in North

Meath where the result was much closer. The Yes vote evoked many smiles at the count centre in Meath West where local Fine Gael TD remarked: “This was about more than just marriage - it was about it being ok to be gay.

In Kildare the Yes vote was 69.67 per cent and while those opposed were 30.33 per cent on turnout of almost 62 per cent.