Opinion: Name recognition or the lack of it could be a key factor in a tight contest 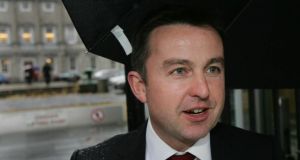 Brian Hayes: a Northsider who has carved out a constituency base on the Southside and whom party members will come out to work for. Photograph : Matt Kavanagh

It has been a busy week on the candidate selection front for the forthcoming European election contest in Dublin. On Sunday Fianna Fáil selected Cllr Mary Fitzpatrick to be their candidate in the capital. On Wednesday the sitting Independent MEP for Ireland East Nessa Childers announced that she would switch to contest in Dublin on this occasion, while on Friday Minister of State Brian Hayes confirmed that he wishes to be the Fine Gael candidate.

In 2009, 10 candidates contested. Two of the winners then were outgoing MEPs: Fine Gael’s Gay Mitchell and Labour’s Proinsias De Rossa. The third seat went to the high-profile Socialist Party leader Joe Higgins. None of these three are recontesting. De Rossa retired in February 2012 and was substituted by Emer Costello. Joe Higgins returned to the Dáil at the 2011 election and was substituted in Europe by Paul Murphy and Gay Mitchell will retire in May.

Media appeal
For Fine Gael running Brian Hayes for Mitchell’s seat is a no-brainer. Hayes is a street-level political grafter with middle-class media appeal and a competent ministerial performer. Provided that for the next five months his affable side dominates over his occasional tendency to be overbearing, he should be a short odd to win a seat and even to top the poll.

If, as seems likely, Hayes does go to the European Parliament, there opens the intriguing prospect of a reshuffle of junior ministers in June and a byelection in Dublin South West in the autumn.

Attempting to predict who might win the other two Dublin seats is is more difficult.

Youngest candidate
The youngest candidate in the field is Sinn Féin’s Lynn Ní Bhaoighealláin, who is an ecologist working with an environmental NGO in Dublin. She has no previous electoral experience in the capital but did contest both the 2007 general election and the 2009 local elections in Kerry South.

In 2009 the left-of-centre candidates, including De Rossa, Higgins, Mary Lou McDonald for Sinn Féin, Deirdre de Burca for the Greens and the former Green MEP Patricia McKenna as an Independent, won almost two quotas combined. McDonald, then an outgoing MEP, was not far behind Joe Higgins in 2009 on the first count. Sinn Féin is now polling at 7 per cent higher in polls in Dublin than it was in 2009. If Ní Bhaoighealláin impresses at all, she is likely to be the strongest of the left candidates on the first count and therefore guaranteed a seat.

While both Paul Murphy and Emer Costello have been active as MEPs since they were co-opted, neither has the profile of Higgins or De Rossa. Costello enjoys the advantage of being a former lord mayor and is well established in the Labour Party in the capital, including in Dublin Central, where her husband, Joe, is a TD and Minister of State. Labour’s current poll figures in Dublin suggest, however, that any Labour candidate without instant name recognition citywide would struggle to hold the seat.

Fianna Fáil is wise to run only one candidate this time. Selecting the gay rights campaigner Tiernan Brady would have been a more courageous decision but Mary Fitzpatrick is an able councillor absorbed in the detail of policy issue affecting Dublin. She will hold her own in the election debates and has the advantage of being distanced in the public mind from the previous Fianna Fáil regime because of her high-profile constituency confrontations with Bertie Ahern’s “Drumcondra Mafia”.

Fitzpatrick enjoyed the pronounced support of the party leadership and headquarters in advance of last weekend’s convention probably because they saw her as the better electoral prospect. Some in Fianna Fáil, however, are privately realistic about how difficult winning a European seat in Dublin is likely to be.

Nessa Childers will be a colourful addition to the Dublin line-up. Bearing an iconic Fianna Fáil name, she is a former Green Party councillor in Dún Laoghaire-Rathdown, who later contested for Labour in Leinster. She has since left that party to be an Independent. This diverse political pedigree could make her very transfer-friendly.

Personality
The Green Party leader, Eamon Ryan, would be similarly transfer-attractive and has name recognition citywide, so is one to watch. There is always, of course, still the possibility that some other high-profile independent politician or personality might contest in Dublin.

With some big names now in the ring, Dublin is certainly the headline bout on the card for the European elections in May.