Fingal county councillors have blocked Dubliners from voting next May on whether to have a directly elected mayor for the capital.Just six of the 24 members of Fingal County Council voted in favour. 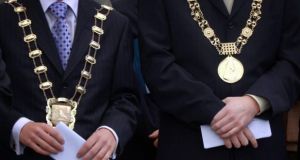 The Local Government Bill laid down that the mayoral plan would be dropped if any one of the four councils in the greater Dublin area voted against holding a plebiscite on the proposal.

Fingal county councillors have vetoed plans for a directly elected mayor for the Dublin region by rejecting the holding of a plebiscite on the issue by 16 votes to six.

The Local Government Bill, published by Minister for the Environment Phil Hogan last October, laid down that the mayoral plan would be dropped if any one of the four councils in the greater Dublin area voted against holding a plebiscite on the proposal.

With 24 members on Fingal County Council, 12 votes in favour were needed in order for the plebiscite to be held.

Opening the meeting today Fine Gael mayor of Fingal Kieran Dennison said Fingal would be “swamped by the greater population of Dublin” if the proposed mayor was introduced.

Labour’s Gerry McGuire said any elected mayor would be based in the city and would ignore Fingal residents. “He will ignore rural Dublin. There will be no chance of getting a pot hole fixed.”

Labour councillor Tom Kelleher also believed an elected mayor of Dublin would concentrate all his attention on the city, “he will turn right at the airport” he said. The people of the “city” of Dublin should have the right to chose if they have a directly elected mayor for the city only, he said. “I wish them the best of luck with that”.

Fianna Fail’s Darragh Butler said voting Yes would be giving Minister for the Environment Phil Hogan “a blank cheque”. But Labour’s John Walsh said it was a No vote Mr Hogan wanted .

“I think this has been deliberately set up to fail with Fingal council set up as the scapegoat. We should ask ourselves who would be happy if this is rejected and the first person who will be celebrating will be Minister Hogan because we will have let him off the hook.”

Fianna fail’s David McGuinness said Labour and Fine Gael had given a “clear commitment” in their pre-general election manifestos for the introduction of the office .

“If these parties vote these proposals down it will be just another notch on the list of broken promises,” he said. “It is not good enough to have this council scupper the rest of the city from having their say on this issue.”

Socialist councillor Ruth Coppinger, who had previously said she would vote in favour of the plebiscite said she wanted it deferred.

“By holding it on the same day as the local elections we will be bouncing people into a decision on which there has been absolutely no public debate.”

Independent Cian O’Callaghan said by blocking the proposal Fingal was playing into the hands of the officials in the Custom House who did not want to hand power over to the mayor, and “doing their dirty work for them”.

Councillors passed two motions, one supported the right of the citizens of Dublin city to elect a mayor for the city council area only, the other, that the Minister should hold a plebiscite on the mayoral issue at a later date.