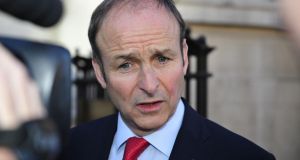 Mr Martin called on Mr O’Brien to pull back from his legal action against the Dáil’s Committee on Procedure and Privileges, saying the “proceedings represent a threat to a fundamental right enshrined in our Constitution, which is freedom of speech in parliament”.

He said: “This is a very serious threat to democracy and it is something I would be passionate about irrespective of personalities involved.

“This is a step too far and we need to be very clear as parliamentarians that we will stem any attempt to curtail the right of parliament to do what it has to do in the public interest.”

The businessman has named each of the 10 members on the committee, including the Ceann Comhairle, Seán Barrett, in the submission to the High Court.

Mr Martin said this was an attempt to curtail or restrict the privilege afforded to politicians and he called on Mr O’Brien to “pull back from this”.

He said: “The issues that were raised by Catherine Murphy were clearly of public interest in so far that they led to the establishment of a Commission of Inquiry.

“In this case, the reporting on Dáil proceedings.”

Sinn Féin leader Gerry Adams said it was a disturbing development, noting “none of this is healthy for democracy. It does not serve the interests of citizens. TDs must be free to question the actions of the powerful and the privileged without fear or favour.”

The committee, which is chaired by the Ceann Comhairle, considered letters from Mr O’Brien’s lawyers on the issue.

After taking legal advice from the Oireachtas legal counsel, the CPP rejected assertions by Mr O’Brien that Ms Murphy had abused Dáil privilege.

It said it could not determine if her allegations were true or false until the Commission of Investigation into certain Irish Bank Resolution Corporation transactions was complete.

Ms Murphy had made a number of claims in the Dáil about the sale by IBRC to Siteserv, a company owned by Mr O’Brien.

Mr O’Brien’s lawyers, William Fry, accused the Houses of the Oireachtas of having no “effective parliamentary procedures to prevent a member abusing parliamentary privilege”.

The clerk to the CPP contacted members on Friday to inform them that each member has been named as a party to the latest proceedings.

In an email, the 10 TDs were told a meeting must be convened in early September to discuss the case.

Members are due to receive further legal advice today from the committee. The CPP will meet early next month to discuss how to proceed and members were told no action is required by them until that point.

The case has been listed for mention on October 7th in the High Court.