David Cameron pulls out of anti-Brexit event with Taoiseach 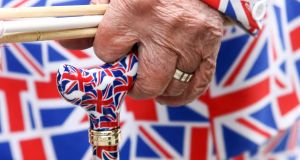 An elderly pedestrian holds a walking stick, featuring a pattern of the a Union Jack, in London, UK. British prime minister David Cameron has pulled out of a planned appearance with Taoiseach Enda Kenny on the UK’s forthcoming referendum on EU membership. File photograph: Chris Ratcliffe/Bloomberg

British prime minister David Cameron has pulled out of a planned appearance with Taoiseach Enda Kenny in Manchester on Friday morning to appeal to British voters to remain in the EU.

Mr Cameron was due to appear at a high-profile early morning event with Mr Kenny to encourage British voters with Irish connections to back the Remain campaign for the UK to stay in the EU.

It is understood Mr Cameron’s decision not to participate in the event was taken after advice by Remain strategists that he has become a liability in the drive to persuade working-class Labour voters to back the pro-EU campaign.

Mr Cameron’s decision came as three of the four latest polls put the Leave side ahead by between six and eight points, comfortably outside the margin of error.

Mr Cameron has stepped back from the campaign since Sunday, allowing Labour to take centre stage as it struggles to persuade its supporters to back the Remain side.

They will warn that a vote for Brexit will trigger an emergency budget to identify tens of billions of pounds in spending cuts and tax increases to plug a fiscal hole created by an economic slowdown.

According to the latest opinion polls the Leave campaign is surprisingly strong in working-class areas in the British midlands and north where Mr Cameron is perceived as a turn-off for Labour voters.

Mr Kenny will go ahead with a scheduled two-day visit to Liverpool, Manchester and Glasgow despite Mr Cameron’s withdrawal from Friday’s planned event.

Over the past month Mr Kenny and members of his Cabinet have been taking an unprecedentedly high-profile role in a political campaign in another country.

Officially, the Government is simply engaging with the Irish community in Britain in the debate over the relationship between the UK and the EU.

However, Ministers have made no bones about the fact they are prepared to do everything they can to encourage a Remain vote as they are extremely worried about the prospects of a decision by the British people to leave the EU.

Mr Kenny was strongly supportive of Mr Cameron during the process that led to a renegotiation of the relationship between Britain and the EU which preceded the referendum campaign.

The Government’s position is that it is important for Ireland that the UK remains in the EU for reasons relating to the economy, Northern Ireland, the common travel area and the effectiveness of the EU itself.

Senior officials in the departments of the Taoiseach and Foreign Affairs have been working for months on contingency plans in the event of the Leave side winning.