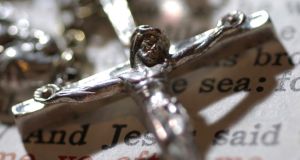 A crucifix has been erected in Kerry County Council meeting chambers in Tralee after council authorities acted on a controversial resolution passed by the outgoing council at its last meeting.

Revamped at a cost of €250,000 to accommodate the increase in members from 27 to 33, the new chamber is set to open today. Fianna Fáil and Fine Gael, which have 18 members between them, are joining forces after years of often bitter division. The parties have never joined forces previously in the county.

The motion for the erection of the cross, put forward by Fianna Fáil councillor John Joe Culloty at the April meeting of the county council, sparked national debate after senior officials warned that erecting a religious symbol would contravene equality legislation.

Mr Culloty said he wanted to ensure the greatest symbol of Christianity was erected in the new chamber in case he should not be re-elected.

The small number of councillors – nine – who remained for the motion, which was dealt with late in the day, were divided on the issue, pointing out that no religious symbol had ever been erected in the council chamber in Tralee.

However, Mr Culloty and his supporters said they were tired of apologising for their religion; local Muslims had no objection and one councillor suggested the erection of the cross might even encourage more “truth-telling” in the Kerry chamber.

Various equality acts including the Equal Status Act and Employment Equality Acts and the Equality Act, were consulted.

The initial conclusion was that the crucifix, a symbol of one religion, could not be erected in the chamber that served the general public and which was also a workplace, a council spokesman said.

However, yesterday a spokesman for the council said it had been decided to follow the wishes of members and a standard-size crucifix had been erected.

Mr Culloty, who has been re-elected, said he was satisfied, the spokesman added.

Six councillors voted for the motion which stated: “In light of our Christian faith and the strong Christian values contained within our Constitution, that Kerry County Council erect a crucifix on the wall of the new council chamber.”

It is understood that the issue may be revisited if employees of the council object to working under the symbol.