Agreement yet to reached over FG/FF pact on county council 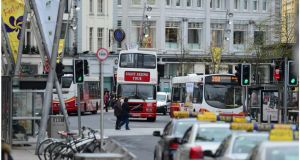 In Cork City Council all parties bar one agreed to adopt a form of d’Hondt system proposed by Sinn Féin last night.

Negotiations continued last night over the formation of power-sharing alliances within Cork city and county councils. The first meetings of both the city and county local authorities since last month’s local elections take place today.

In Cork City Council all parties bar one agreed to adopt a form of d’Hondt system proposed by Sinn Féin last night. The inclusive system should secure two Fianna Fáil mayors over a five- year period, one Fine Gael, one Sinn Féin and one mayor selected from Independents and Workers’ Party representatives. Anti-Austerity Alliance members have not agreed to the system as yet. “It was a long hard road to get this far,” Sinn Féin councillor Chris O’Leary said of the agreement.

Fianna Fáil holds 10 of the 31 city council seats, Sinn Féin secured eight, Fine Gael have five. The remaining seats are held by three members of the Anti-Austerity Alliance, one WP, and four Independents. Labour will not be represented .

In Cork County, Fianna Fáil returned 17 members, one more than Fine Gael. Together they would have a clear majority in the new 55-seater council, although agreement over an expected pact between the two had yet to be agreed yesterday.