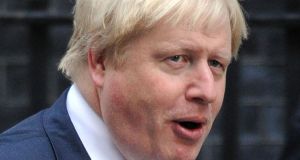 Government Ministers have privately criticised leading UK ministers, including Boris Johnson, in briefings to colleagues on Britain’s exit from the European Union.

A confidential Brexit memo also outlines the approach Ireland must take to building alliances to ensure that Britain maintains as close ties as possible to the EU.

The memo, seen by The Irish Times, identifies France and other Mediterranean countries, as those most likely to be comfortable with a so-called hard Brexit.

It says: “It will be important to identify those member states that, like Ireland, are likely to favour a future status for the UK as close as possible to the current arrangements, and those member states which might not be unduly concerned if a hard Brexit were to happen.”

The memo was discussed at a meeting of the Cabinet subcommittee on Brexit last week, which also heard Minister for Jobs Mary Mitchell O’Connor compare her UK counterpart’s attitude to Brexit as a husband who wants to divorce his wife but keep all the assets, including the family home.

Dr Fox and Mr Johnson, the UK foreign secretary, are two of a trio of ministers appointed by British prime minister Theresa May to oversee Brexit, alongside David Davis, the secretary of state for Brexit.

Ms Mitchell O’Connor’s comments, although they drew laughter, reflect a concern among Ministers about British expectations.

Minister for Foreign Affairs Charlie Flanagan also told an earlier meeting of the Brexit committee that Mr Johnson had given no indications how Britain would approach its EU negotiations.

Ms Mitchell O’Connor was surprised by the approach taken by Dr Fox at their recent meeting. He is understood to have said Britain wants to maintain access to the EU single market but also exercise control over immigration, which is at odds with the EU position that single market access must be accompanied by free movement of people.