Commission to assess status of IRA central to Northern talks

Eastablishment of commission seen as possible way of resolving deadlock 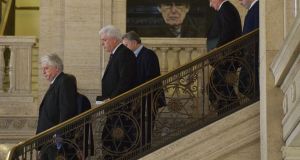 The establishment of a commission to assess the status of the IRA and other paramilitaries is expected to be a central issue in Northern Ireland crisis talks next week.

Northern Ireland Secretary Theresa Villiers yesterday indicated she saw saw merit in reactivating some form of independent monitoring body to assess the status of the Provisional IRA, and other republican and loyalist paramilitary groups.

This is seen as one possible method of resolving the deadlock threatening the Stormont institutions. The idea has won support from the Irish Government and Fianna Fáil.

Yesterday, Sinn Féin signalled it would be willing to discuss such a move, but warned any such body could not investigate Sinn Féin with a view to being used as some kind of “test” for the party or as a means of excluding it, notwithstanding its mandate.

“If it means being involved in dialogue and discussions about mechanisms to do that, we will engage with that, as we have done in a very positive way in every negotiation we have been involved in over the past 20 years.”

Ms Villiers and Minister for Foreign Affairs Charlie Flanagan are hoping the North’s five main parties will gather again at Stormont House on Monday in another attempt to end the crisis and to also address the issue of welfare reform.

Taoiseach Enda Kenny said he believed it was worth saving the powersharing institutions in Northern Ireland. Mr Kenny warned if they collapsed, it would take a “very long time” to get back to the normal running of the administration.

He said the evidence available from the Minister for Justice is the IRA does not exist. “The cell formation of the so-called IRA is no longer functioning in that manner,” Mr Kenny said. “It doesn’t mean that people who are members of cells don’t meet in terms of criminal activity, particularly in Northern Ireland,”

British prime minister David Cameron told Northern politicians: “We stand ready to help,” he said, “including standing ready to help with getting rid of the paramilitary organisations and properly examining how they still exist, what they consist of and putting them out of commission in our country.

Mr McGuinness and Sinn Féin leader Gerry Adams, speaking at their party’s think-in, in Co Meath, both said they expected all five parties to participate in the talks.

The DUP will hold internal meetings over the weekend to decide whether to attend the talks. The Ulster Unionist Party said it would only discuss issues relating to the murder of Belfast republican Kevin McGuigan and the status of the IRA.

The SDLP will attend the talks. “We need comprehensive talks that deal with the root problems that caused this crisis,” said a spokesman. “It’s a combination between Peter Robinson holding the institutions to ransom and trying to bully other parties into dancing to his tune and Sinn Féin giving him the perfect opportunity with its flat denials about the IRA, particularly surrounding the murder of Kevin McGuigan.”

Arlene Foster, the sole DUP Minister remaining in the Executive, told the BBC: “I’m not going to put at risk to the people of Northern Ireland the possibility that rogue Sinn Féin or renegade SDLP ministers are going to take decisions that will harm the community in Northern Ireland.” Sinn Féin’s Mary Lou McDonald described Ms Foster’s suggestion as “rubbish”.