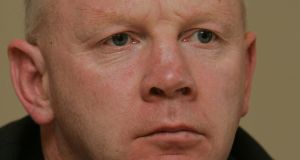 The new chair of Kerry County Council, Cllr John Brassil, FF, a pharmacist and engineer from Ballyheigue - a married man with three children - has already declared his interest in running in the next general election for Fianna Fáil. Photograph: David Sleator/The Irish Times

A Fianna Fáil councillor has been elected to the chair of Kerry County Council with support from Fine Gael in a historic election signalling the end of Civil War politics in the county.

It is the first time the parties have come together in a county which saw some of the most terrible atrocities of the Civil War. The historic occasion was marked with sentiment - but also good humour.

The new council includes descendants of men who had fought together in the War of Independence but who divided subsequently: Fine Gael’s Cllr Patrick Connor-Scarteen and Fianna Fáil’s Thomas McEllistrim, the former TD, who has been newly elected.

Mr Connor-Scarteen’s granduncle Tom had fought alongside Tom McEllistrim in the War of Independence, taking part in the Headford ambush, one of the turning points in the war, but the two afterwards took different sides in the Civil War.

Cllr McEllistrim was elected vice-chair, again with support from Fine Gael. The former TD, who lost his seat in the 2011 general election, remarked: “I kept my promise, Mc will be back.”

Sinn Féin took credit for the historic coalition between Fianna Fáil and Fine Gael, with Cllr Robert Beasley saying it was the increase in Sinn Féin councillors from two to five which had brought it about.

“We are responsible for the Civil War being ended,” Cllr Beasley said.

The new chair, Cllr John Brassil, FF, a pharmacist and engineer from Ballyheigue - a married man with three children - has already declared his interest in running in the next general election for Fianna Fáil.

He was supported by the nine Fine Gael members, the nine Fianna Fáil members and Independents from the Fianna Fáil gene pool, including Danny Healy-Rae, Michael Healy-Rae and Cllr Michael Cahill.

There were several references to old rusty bayonets and rifles having to be handed up, with Cllr Brendan Cronin remarking that De Valera and Michael Collins were today joining under the council chamber’s new crucifix.

Cllr Toireasa Ferris, speaking on behalf of Sinn Féin, said: “Don’t be surprised if there’s a few grenades thrown in from this side of the house.” To which Independent Johnny Healy-Rae, remarked: “Nobody would be surprised at that.”

The new 33-member council represents an increase from 27 members as a result of the ending of town councils. It includes five women councillors, and 14 of them are newly elected.

The council is facing a challenge from former Fianna Fáil senator Dan Kiely, who failed to be elected to the council by two votes and who wants the Listowel electoral area result declared invalid.

The case centres on spoiled votes, and Mr Kiely’s claim that his request to inspect them was refused by the returning officer at the count .

The case is being heard on June 17th at the Circuit Court - his legal team Liz Murphy, and solicitor and former councillor Paul O’Donoghue told the Circuit Court last week the agm would be invalid until the question of the Listowel result was decided.

The council denied this and the agm went ahead.