Church said Ann Lovett’s death was due to her ‘immaturity’ 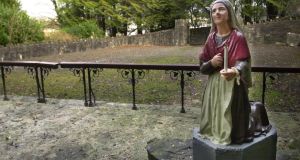 The Granard grotto where Ann Lovett went to have her baby in late January 1984. Photograph: Brenda Fitzsimons

The Catholic Archdiocese of Armagh said Ann Lovett’s death reflected “more on her immaturity than on any lack of Christian charity amongst the family and people with whom she lived”.

The 15-year-old schoolgirl from Granard, Co Longford, died after giving birth beside a grotto to the Virgin Mary on January 31st, 1984. She was discovered by friends with her dead baby and bled to death before an ambulance arrived to take her to hospital.

Though her death created huge public debate the only reference to her in the newly released National Archives documents is at the back of a file on the visit of US president Ronald Reagan to Ireland that year.

It arises in letters from poet Christopher Daybell to then taoiseach Garret FitzGerald and tánaiste Dick Spring about the death. Daybell enclosed a letter to him from the Archdiocese of Armagh written in response to his correspondence, which is not on file.

“It is rather difficult to solve a problem that one does not know exists. Any priest could tell you of similar cases where children came to full-term without it being known to either their parents or their teachers.”

It said “it was rather unfortunate” Ann did not “make it known even to her friends who might have been able to help her or did not seek medical assistance independently of her parents or teachers”.

“Why she chose to keep her secret will never be known,” it added. “I think her sad death reflects more on her immaturity than on any lack of Christian charity amongst the family and people with whom she lived.”

The letter was signed by the diocesan secretary to the Catholic primate, cardinal Tomás Ó Fiaich, and noted the cardinal was absent.

In Mr Daybell’s covering letter to Dr FitzGerald, dated March 3rd, he told the taoiseach the girl’s death “coupled with” the letter from the archdiocese, had driven him “almost mad”.

Referring to the description of Ms Lovett as immature, he wrote, “Why should she not have been so, at 15?”

He also asked what assistance or intervention mechanism existed in Granard “apart from those elements which induce fear”. He included a poem he had written about the death.

In his letter of March 2nd to Mr Spring, he said it could emerge, “considering the hideous attitudes of men toward women in rural Ireland”, that Ms Lovett “was driven by forces other than those within herself”. “I await the result of the enquiry in a now cool anger, and hope that it will stiffen the resolve of your government on divorce and contraception,” the poet wrote.

Only one letter in response to Mr Daybell remains on the file. Dated March 8th, it is signed by the taoiseach’s then private secretary George Shaw. It thanks him for his “further correspondence”, which he said would be brought to the taoiseach’s attention.

In a different typeface, someone printed “locate previous papers and put away”.