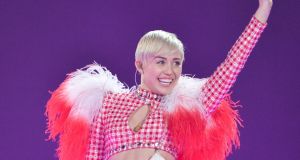 Celebrities around the world were quick to voice their support for people of Ireland voting to legalise same-sex marriage.

The State has become the first country to officially pass same-sex marriage by referendum.

Talk show host Ellen DeGeneres took to Twitter to share with her 43.6 million followers her support for the vote.

“Ireland did it! The 1st country to legalize marriage equality by popular vote, but they won’t be the last! What an incredible accomplishment”

Singer Miley Cyrus had a short but to the point tweet for her 19.5 million fans: “Fuck yeah Ireland!”

Congratulations to Ireland for legalizing same-sex marriage on a national level! Come on U.S., let's catch up to the future.

Here at #HayFestival - almost no signal but news in that Ireland’s Yes Campaign has carried the day. So so happy. Oscar smiles in his grave.

I proudly raise a pint glass of Guinness and toast the people of Ireland for voting by a sweeping majority to legalize same sex marriage!

So happy Ireland have passed the law to get married there. Still genuinely shocks me thou, that this is only just happening!!

Actor Russell Crowe was also showing love for our green isle in his tweet: “Dear Ireland, you are even more amazing.”

Comedian Sarah Silverman had encouraged as Yes vote as people went to the polls.

“Republic of IRELAND leads the world in social progress by legalizing marriage for all. #LoveWins (shouldn’t it always?)”

Irish actor Chris O’Dowd, a native of Roscommon, was proud of the Yes vote result but coming to terms with his home county’s No stance.

“I was awarded the freedom of Roscommon. Martin McAleese has the same honour. In protest to county’s No vote, we’re french-kissing right now,” he said.

“Seems the ‘No vote’ tactic of telling Roscommon people that ‘Gays polluted the water’ worked. Also, maybe the gays really shouldn’t have.”

Actor and writer Stephen Fry wrote heartfelt words to the people of Ireland on the result.

“The Irish people spoke. And the words they spoke were Respect, Dignity and, loudest of all, Love. The sanctity of marriage has been upheld,” he said.

Fry, who married his partner in Elliot Spencer at Norfolk in January, had publicly spoken out in favour of the Yes campaign earlier this month.