Cabinet scorecards: So which Minister gets zero out of 10?

While colleagues are showing improvement, Shane Ross reveals little enthusiasm for the job 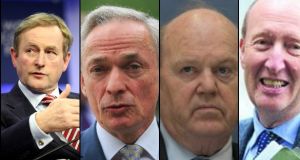 Taoiseach Enda Kenny has found his footing in this administration; Richard Bruton has gone about his work quietly while Michael Noonan has numbers to crunch ahead of the budget. But Shane Ross has failed to shine. Photograph: The Irish Times

He has survived and that counts for something. Yet it has come at a huge cost. Fine Gael had a terrible election, heavily losing seats on the back of bad strategy. Its campaign slogan annoyed.

Back in office, Kenny has found himself heading a fragile and weak administration, buoyed up by Independents. However, he has made some terrible choices: naming James Reilly as deputy leader, or not facing down the Independents over a private members motion on abortion.

Suddenly his own future was in doubt again. But he deftly put down the nascent rebellion. For now, he still commands the support of most FG TDs, although that could change.

Uncharacteristically subdued after the election, he has rediscovered some of the old ebullience. Curiously, Brexit has helped him, since he is able to tap into his good relations with European colleagues.

Noonan had an indifferent election, looking tired and drawn. His tax proposals – especially a convoluted withdrawal of universal social charge – did not go down well. Younger opponents, Pearse Doherty and Michael McGrath, seemed to have an edge on him.

Supported by questions about his health, there was some doubt about his return to office. But he showed his worth during protracted coalition negotiations. During key moments, Noonan smoothed ruffled feathers.

Things have changed since 2011. For one, the Government is no longer staring into an abyss. Then it had ceded sovereignty to the EU-IMF troika. Now it’s Fine Gael which has ceded sovereignty, to a majority opposition in the Dáil.

The budget will no longer offer him star billing. From now on, every TD can be a member of the Greek chorus. A new budget committee will not really come into its own until next year. Ultimately, Noonan will have to square everything with Fianna Fáil’s Michael McGrath.

Since the election, he has been relatively quiet, and steady as she goes.

Henry Marsh was an American steeplechase runner in the 1970s and 1980s who was notorious for slouching at the tail end of the field for most of the race and then bursting into life and reeling in his rivals in the last lap.

Let’s hope the TD for Dublin Rathdown Shane Ross is following that game plan for there is precious little evidence to show that he has been up to anything much in the first three months in office.

So far, we are told his priorities will not be announced until September, a full four months on. Every new Minister needs time to settle in, but this is Shane Ross – the firebrand who has railed loudly against mediocrity and low standards for 30 years.

There is little to show Ross has been doing anything much. And there are mutterings about his enthusiasm for being a Minister, while there is nothing to suggest any level of activity on Cabinet sub-committees.

And this is a key ministry, bringing together two of the country’s vital areas, both crucial for the economy, plus the socially important area of sport. As of now, the Minister has no public strategy for any of them.

His most public act since he took up office has been a cynical one, to ride roughshod, along with Independence Alliance members, over the notion of collective Cabinet responsibility on a private member’s motion on the Eighth Amendment.

His lack of activism has not stopped Ross from travelling to the European Cup in France as well as to the Rio Olympics – the very trips that he would have condemned (with much hyperbole) as jollies in his previous life.

Ross, however, has to be praised for having the foresight to form the Independents’ Alliance. Then he nearly ruined everything by a crass branding of Enda Kenny as a “political corpse”.

If things carry on as they are, it is Ross who will become the cadaver.

It’s her second 100 days as a senior Minister and it has gone a lot better than her first, which were a disaster. Plucked then from the back-benches and still unsure of her feet, she was coerced into nominating John McNulty to the board of the Irish Museum of Modern Art.

She learned from that disaster and will not be taken for such a ride again.

Humphreys has had a good year, much of it based on her role in the 2016 centenary commemorations. The public liked the idea, so there was little downside, but it was not without difficulty.

The initial stabs at the centenary were poor – a promotional video hardly referred to the events of 1916. By the end, however, Humphreys was a visible and constant presence, displaying a deft hand.

The Monaghan TD is a practical, pragmatic and canny politician, but no ideologue or policy wonk. Some in the artistic community do not see her as a natural fit but she has published a draft framework policy for culture.

One of her 100 days’ priorities was the Wildlife (Amendment) Bill which de-designated 39 bogs from being natural heritage areas. A sop to turf cutters and Independent TDs, it was seen by some as a retrograde cynical concession.

Critics say she does not have a fire burning in her belly for heritage either. She and Denis Naughten have set up a taskforce on mobile phone and broadband coverage, another one of the first 100-day “action plans”.

There was speculation before the Cabinet announcement that Bruton would get Education, apparently based on an interview he once gave expressing interest in the subject.

Those close to him dismissed it, saying it was based on a 20-year-old interview.

In fact Bruton fought to stay on in Jobs and Enterprise. He had to do so once before. This time, however, it did not work; leaving him with a sideways, perhaps downwards, move to Marlborough Street – the first Fine Gael occupant in a generation.

Comfortable with discussions on policy and issues, Bruton has gone about his business quietly, producing new admissions legislation and continuing Ruairi Quinn’s work to take more schools away from religious patronage.

He has also accelerated plans to appoint 860 extra special needs assistants and worked on plans to use school buildings out of hours for after-school care and made good on a pledge to cut the primary pupil-teacher ratio from 28:1 to 27:1.

A quiet and efficient start, but he has not stuck his head over the parapet yet.

Minister for Agriculture, Food and the Marine Michael Creed

After the leadership heave in Fine Gael in 2010, Michael Creed was on the losing side. He had been formerly close to Enda Kenny. Afterwards his political ambitions were encased in permafrost.

His appointment as Minister for Agriculture was one of Kenny’s few big surprises, though Creed has a pedigree and background in the subject. Yet, he had been a long time in the wilderness and it was a big vault to reach the heights of Cabinet.

So far, he has kept a low profile, as he gone about finding his ministerial feet. In Brussels, he has lobbied for struggling dairy farmers, while he has also called on the banks to be more flexible towards them.

Agriculture is an efficient department, so he will benefit from that, but Brexit is going to be a massive headache for him. He has set up a special Brexit unit and is meeting the major players. He will need to be prominent in the months ahead.

He has adopted his predecessor Simon Coveney’s stance on climate change. Yes, we want to reduce emissions, but we do not want to cut agricultural production. Indeed, we want to increase it. The goals contradict.

It is too early to say how he will do on the Marine side.

The Wexford TD, one of Kenny’s most loyal lieutenants, has long coveted a senior ministry. Now, he has almost got one. He is a super junior, with a seat at the Cabinet table and full responsibility for Defence.

Independents are a little iffy about his inclusion in Government, since his portfolio is not a full one and traditionally was part of a larger brief. Nevertheless, he arrives into the department at a good time: the recruitment ban was lifted early to keep the ranks young.

Extra money is sanctioned to buy new kit for the Army, Naval Service and Air Corps, including a new ship and state-of-the-art armoured trucks.

Part of his challenge is how he will react to situations thrown up by the Defence Forces’ overseas duties – including the Golan Heights in Syria and the Naval Service’s humanitarian mission in the Mediterranean.

Three years ago Paschal Donohoe was a backbench TD. Since then, like Simon Harris, he has been fast-tracked to the top and is now being talked about as an outside possibility as a future leader and a real possibility as the next minister for finance.

His rise is based mostly on competence but also on loyalty to Enda Kenny. His interview delivery may be sing-song, but he has proven to be a tough cookie as a Minister. Claims advanced without evidence end up being rejected.

Policy-driven, he was comfortable in Transport, involved in a big capital spending plan, along with overseeing the Luas upgrade. In his new portfolio, he takes over Brendan Howlin’s responsibilities.

Deeply involved in the Simon Coveney’s housing plan, he is working also on a €4 billion spend on housing, transport, broadband, education and flood defences over four years.

He has also kick-started the work to establish the successor to the Lansdowne Road pay agreement, along with another forum for non-pay squabbles.

Meanwhile, he has worked on less showy stuff –public service reform, better value State procurement, while he has also signed the enforcement provisions of the lobbying legislation.

His first big test will be the October budget, where he will share the limelight with Michael Noonan.