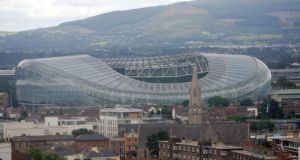 The new rules will not apply to Croke Park or the Aviva Stadium (above). File Photograph: Bryan O’Brien/The Irish Times

Sports clubs will only be liable to pay commercial rates on parts of their clubhouses which house bars or shops under amended rules agreed by the Cabinet.

Minister for Public Expenditure and Reform Brendan Howlin brought a memo to Government on the issue.

The new rules mean community sports clubs will only be liable for rates on buildings are used to generate income.

Sports club facilities are normally exempt from rates but where the club has a bar, all of its premises are valued for rates purposes, including buildings that are purely for sporting purposes.

“This situation is seen as placing an unfair burden on many local clubs that are a key part of their communities,” a Government spokesman said.

“Any type of building, or part of a building, used for ‘community sport’ and not for profit and which is not used to generate income can be exempt,” the spokesman said.

However, the new rules will not apply to Croke Park or the Aviva Stadium. No sport is excluded.

“Buildings used by a golf club could be exempt if the buildings are not used directly or indirectly in the generation of income. Income extends beyond the bar and would include food, a sports shop, green fees ,” the spokesman added.