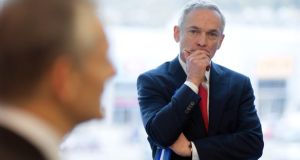 Minister for Enterprise and Jobs Richard Bruton, who said people would now expect to see the big decisions taken in the full light of transparency. Photograph: Daragh Mc Sweeney/Provision

Minister for Enterprise and Jobs Richard Bruton has said.

He said the former social partnership model, which centred on agreements on incomes policy, taxation, public service reform, and economic and social policy, “involved issues that were primary matters for government to decide”.

Speaking at the annual Industrial Relations News conference in UCD, Mr Bruton said people had been through a great transition and would now expect to see the big decisions taken in the full light of transparency. There would be no question of some people having greater influence than others.

He said social dialogue remained a crucial part in the delivery of reforms, but this dialogue was very much under the direction of Ministers in particular areas.

Pay freezes
Mr Bruton also appeared to dismiss reports there would be talks between the Government and unions and employers in coming months on a deal involving pay freezes in return for tax cuts.

Asked whether such a move would happen, he said: “No. I think the idea that we have reached a point in our recovery that there is a one-size-fits-all [approach] for all the different sectors out there that are facing very different conditions is not a realistic appraisal of where we are at.”

Separately, a senior civil servant heading policy on pay, pensions and industrial relations in the public service told the conference the Government would have to decide what would replace the five pieces of financial emergency legislation which underpinned pay and pensions over recent years.

Oonagh Buckley, assistant secretary at the Department of Public Expenditure, said legislation was in place for the duration of a financial emergency and would not continue beyond it.