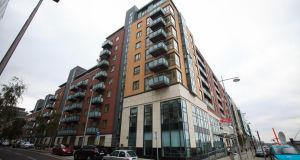 A full audit of apartments and other buildings built during the “Celtic Tiger” period should be carried out by every local authority, Minister for Public Expenditure and Reform Brendan has proposed.

Speaking on his way into Cabinet on Tuesday, Mr Howlin said people had paid good money for houses and were entitled to expect those dwellings were of a decent standard. They should not be at risk from fire or anything else.

“There are lots of legacies from the poisonous period of the Celtic Tiger,” Mr Howlin said.

“Obviously the economic destruction of Ireland was the most egregious one of them, but there are others that we will be living with for a while and one of those is the lax building standards that were allowed to happen on the previous government’s watch,” he added.

“I think every local authority should set about ensuring that there’s a full audit of any apartments or buildings built during that period to ensure the residents and all of us that things are safe and as they should be.”

Turning specifically to Longboat Quay, Mr Howlin said he had spoken last night to his Labour colleague, Minister of State Kevin Humphreys, who has asked the gardaí investigate the situation.

Any issue relating to criminal culpability was a matter for the gardaí, Mr Howlin said.

Mr Kelly, also speaking ahead of the Cabinet meeting, said he wanted to make sure everything possible was being done for the residents. “I’m meeting them with a very open mind. I want to discuss all the issues with them,” he said.

“I want to make sure that all the parties coming to the table are coming in a genuine fashion and that everything is being done to help these people who find themselves in a very unfortunate situation through no fault of their own.”

He said he expected there were probably similar problems in developments across the country. “It’s a legacy of rushed building, bad regulation that went on for many years.”

Mr Kelly said Mr Humphreys was a “person of conviction” and if he felt the move was necessary that was a matter for himself.