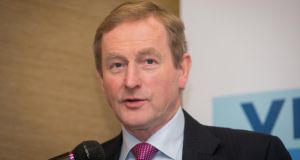 Taoiseach Enda Kenny: a number of Fine Gael TDs and Senators have urged him to change the legislation. Photograph: Gareth Chaney Collins

The Department of Health is examining a number of alterations to the Public Health (Alcohol) Bill after intense opposition by Fine Gael TDs and Senators.

Up to 20 members have urged Taoiseach Enda Kenny to change the legislation, which would restrict advertising of alcohol and introduce minimum pricing.

However, the primary concern of the Fine Gael TDs and Senators is the clause forcing retailers to separate alcohol from other products in shops.

It is understood senior officials in the department are examining a number of options to ensure there is not an “onerous burden” on small retailers.

The proposals being considered are giving shop owners a longer time frame to introduce the segregation of alcohol and other products. It is currently a year but could be extended to two years.

The department is also assessing if the size of the shop can be taken into consideration while enforcing the rules.

One other option is removing certain type of alcohol from viewpoint and leaving others in sight.

Department officials say they have time to consider potential amendments because the Bill is not due to be considered again in the Seanad for a number of weeks.

The changes are being considered after the Taoiseach told a meeting of his parliamentary party “common sense” needed to prevail on what was a tiny part of the Bill.

Mr Kenny’s comments were seen as a direct call for the Ministers in charge of the Bill to engage with their colleagues and make changes if necessary.

Business and retail groups have been lobbying TDs and Senators about the potential impact of segregating alcohol from other products.

They say this could have huge financial implication for small business owners particularly in rural Ireland.

Members of the Independent Alliance have now raised concerns over the implications. The deputy Government spokeswoman said: “Members of the Independent Alliance – while acknowledging the benefits of other parts of the Bill – have said that the obligation to have a physical barrier between alcohol and other items in a shop may cause considerable hardship and financial pressure to small shop owners around the country.”

“The group said this is an additional cost for small business owners and raised questions as to whether it would actually reap any dividends as well as questioning how this proposed regulation would be policed.”

The department had suggested a curtain would be placed over alcohol products but it was ridiculed by many.

Speaking to The Irish Times, Minister of State at the Department of Health Marcella Corcoran Kennedy said the “booze curtain” was an example to show the options available to retailers.

She said others included placing material over fridge windows to hide the alcohol from the view of children.

The Minister of State insisted she was willing to work with her colleagues on the Bill.

However, she said tough measures needed to be taken to deal with the problem of alcohol in this country.

Ms Corcoran Kennedy said: “We have to listen to everything. But the measures that are in this Bill are rooted in evidence.

“If people can produce evidence to me that their actions are well worth taking on board I am willing to examine them.”

Fine Gael Senators have raised a number of other concerns about the Bill including a ban on alcohol-branded children’s clothing.

Senators Paddy Burke and Tim Lombard have suggested the clause is too hard to police and unpractical.

However, department officials have insisted they are not willing to greatly alter any other aspect of the Bill bar examining the area of segregation.