Labour TD Alan Kelly has said he hopes to run unopposed for the role of Labour Leader. The former minister for the environment was speaking to Ryan Tubridy on The Late late Show. Video: RTE 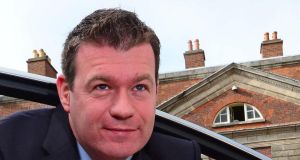 Labour TD Alan Kelly: Hopes the party will double its number of seats in the next election. Photograph: The Irish Times

Mr Kelly said he plans to put his name forward but would not be drawn on who will nominate him.

“I’d love to be [Labour Leader]. It’s been an ambition of mine all my life,” he told the RTÉ Late Late show.

He said that the process to elect a leader will begin this weekend. *

He said the party will work in a “collaborative way” to elect a new leader and there may not be a deputy leader due to their small numbers.

He said he hopes Labour will double its number of seats in the next election; the party has seven seats in the Dáil compared to 37 before the general election.

Mr Kelly, who was Labour’s director of elections, said the general election result for the party was “disastrous” and that the party did not articulate its message well.

When asked about the Sunday Independent interview in which he said power is a drug, he replied that he “didn’t articulate himself well”.

“I’ll be honest. I shot a wide that day,” he said, but added he has “ scored plenty of points in his time”.

He said he was trying to express the point that people who get into politics should do so to be in power and achieve things.

Mr Kelly said the hardest part of politics is being away from his family and trying to spend time with his two children.

“Watching Peppa Pig and Curious George makes you come back to reality very quickly,” he said.

Asked for his thoughts on the new Government, he said he “did not think it was off to a good start”.

“One minister had to be told by the Attorney General to obey the laws of the land,” he said, in reference to Minister of State with responsibility for disability Finian McGrath, who initially refused to pay his water charges.