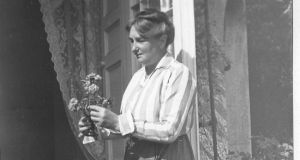 She and Frank Sheehy Skeffington were the most vocal pacifist opponents of the first World War, their ideals put to the test by the increasingly militaristic stance of both loyalists and nationalists. The 1913 strike and lockout were major influences on Bennett’s career.

While admiring James Connolly as “a thorough feminist in every respect”, she refused his request to help reorganise the Irish Women Workers Union (IWWU), as she could not support any organisation which might threaten to use force. After the Easter Rising she attended her first Trade Union Congress in August 1916. The IWWU was officially registered as a trade union in 1918, with Bennett and Chenevix its honorary secretaries. Over the years it won many reforms in pay and working conditions. In 1932, she was elected the first woman president of the ICTU.

Resisting the 1936 Conditions of Employment Act, which legalised restrictions on women’s employment, and organising a 14-week laundry workers’ strike in 1945 were just two of the battles she fought on behalf of women workers. She retired from the IWWU executive in 1955 and died in 1956.