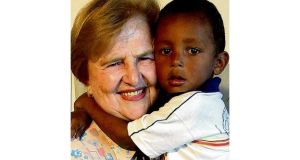 DEATH OF AID WORKER:AMONG THOSE killed in the Haitian earthquake is Brazil’s most prominent humanitarian aid worker, who died after being struck by falling masonry in the church in Port-au-Prince where she was meeting local aid workers.

Zilda Arns Neumann (75) was the founder of the charity Pastoral Care for Children which is credited with saving the lives of unknown thousands of Brazilian children by providing basic medical support to Brazil’s poorest children and pregnant mothers.

Today it cares for more than 1.6 million children in Brazil and has expanded its operations to another 20 countries around the world. The charity turned Dr Arns into a national figure and today Pastoral Care for Children is one of Brazil’s most respected organisations.

A Nobel Peace Prize nominee, Dr Arns was making her second visit to Haiti where she sought to share the expertise her charity had built up with the Americas’ poorest society, according to her son, Nelson Arns Neumann, who works for his mother’s charity.

A paediatrician in a hospital in her home city of Curitiba in the south of Brazil, Dr Arns set up the charity in 1983 under the auspices of the Catholic Church after being struck by how many of the illnesses she treated could be prevented with basic medical care and instruction.

The charity sets out to teach the country’s poorest mothers the importance of basic nutrition and hygiene. The programme is considered especially suited for poorer countries as it also works to identify and train local mothers in marginal communities who can then go on to instruct other women.

Dr Arns was the sister of Cardinal Paulo Evaristo Arns, the former archbishop of São Paulo, who was a leading opponent of the country’s military dictatorship and set up the Torture Never Again project, which catalogued the military’s abuses while in power.

Now retired and increasingly frail, the cardinal was informed of his sister’s death by her son. In a statement the cardinal said his sister “died in a beautiful manner, dying for a cause she always believed in” and that now “is not the hour to lose hope”.

President Luiz Inácio Lula da Silva has ordered three days of national mourning for Ms Arns and the 14 Brazilian soldiers who died in Haiti where they were serving with the UN peacekeeping force.

With 1,200 troops in the country, Brazil is helping to lead rescue and relief efforts for the stricken Caribbean country.

1 Shane Ross: ‘I lost a friendship with Mattie McGrath completely. He got totally personal’
2 Storm Jorge: Power outages, fallen trees expected as ‘exremely strong wind’ to hit Ireland
3 Murder in a crowded house: The full story of the Patricia O’Connor trial
4 ‘We had spies there . . . I envy them.’ How the political world saw Sinn Féin’s meetings
5 Coronavirus outbreak: WHO raises risk warning to ‘very high’
Real news has value SUBSCRIBE