Dean MacCearaín was acquainted with Eoghan Culligan, who died in the Berkeley balcony collapse 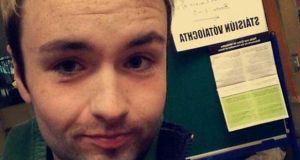 A photograph of Dean MacCearaín (Dean McCarron) from his Facebook page, showing him on the polling day for the same-sex marriage referendum. 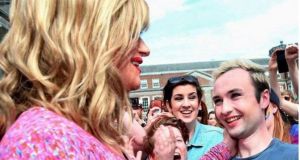 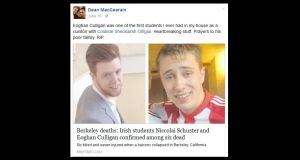 Dean MacCearaín was acquainted with Eoghan Culligan, who was one of the students killed in the Berkeley balcony collapse in June.

Police in the United States are investigating the death of an Irish student who was visiting San Francisco for his brother’s wedding.

Dean MacCearaín (23) was a campaigner for the Yes Equality group during the same-sex marriage referendum. He also featured in The Queen of Ireland, a documentary about Rory O’Neill, also known as Panti Bliss.

The Department of Foreign Affairs confirmed it is providing consular assistance to the family of the student who died on Wednesday.

The cause of death has not been confirmed but it is understood police do not suspect foul play at this time.

Mr MacCearaín, from Co Monaghan, was a student at Maynooth University. Catherine Black, of the university’s chaplaincy service, said she was “so sad to hear this terrible news” and urged students to contact the chaplaincy for support.*

In a tribute on her Facebook page on Friday night, Panti Bliss said Mr MacCearaín had featured in a scene in her film, just released.

“I didn’t know Dean very well, but he features prominently in a lovely scene in The Queen of Ireland, while celebrating the result of the marriage equality referendum”, she said.

The young man in this picture is Dean MacCearain. I didn't know Dean very well, but he features prominently in a lovely...

“One of the film’s producers had to track him down afterwards and ask his permission to use the clip in the film, and he was excited and proud to be in it,” wrote Panti Bliss.

“Today we learned the shocking news that Dean passed away this week while in San Francisco with his family. We didn’t know Dean very well, but we didn’t need to know him very well to know he was a smart, quick-witted, funny, charming young man.

“The thoughts and deepest condolences of everyone involved in the film are with his family, his many friends, and his former classmates at Maynooth University where he was a former president of the Pride Society and a much loved drag star. Which came as no surprise to us. We could tell immediately he was a star.”

The students’ union at Maynooth also paid tribute to Mr MacCearaín in a statement.

“MSU cannot find the words to express our regret at the loss of one of our stellar former students, Dean MacCearaín,” it said.

“Dean was an individual of incredible talent, creativity, quick-wit and probably most of all . . . sass. He was a legend,” the message continued.

“Former president of our Pride Society, a beloved resident drag queen, a friend to so many, and not least of all a total character to everyone he met in his whirl-wind adventures and stories along the way.

“Dean was also a key student campaigner in the recent marriage equality referendum, and on so many student and community issues before that. He wanted to make the world around him a better place.

“Dean passed away while visiting the states with his family, and further details will be known soon, which once we have them, we will share.

“On behalf of all our students, we want to convey our deepest and heartfelt sympathies to his family home and abroad, his many friends, and his former classmates here in Maynooth.”