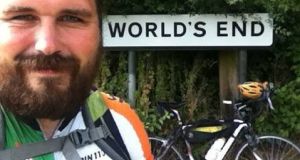 Breifne Earley won the world record-breaking cycle race through 25 countries and returned home this July to his home near Leitrim village, Co Leitrim. Bad luck hit on Sunday night when his bike, valued at €3,500 but worth much more to him in sentimental value, was one of two stolen off a the back of an SUV.

An Irish international cyclist who pedalled almost 30,000km around the world to raise awareness of suicide has had his top-tier bike stolen in Co Roscommon.

Breifne Earley won the world record-breaking cycle race through 25 countries and returned home this July to his home near Leitrim village, Co Leitrim.

Bad luck hit on Sunday night when his bike, valued at €3,500 but worth much more to him in sentimental value, was one of two stolen off a the back of an SUV.

The 4x4 had been close to a roundabout at Cortober, on the Co Roscommon side of the river Shannon at Carrick-On-Shannon, after himself and a friend had taken part in a cycle for Pieta House in Tuam, Co Galway.

According to Mr Earley, CCTV showed two men arrive in a red van, the registration number of which was visible in the footage and which was given to gardaí.

The footage showed the men removing both bikes from a harness on the back of the vehicle and putting them in the van before driving off.

Mr Earley is hoping social media users and the internet will help trace his bike before it can be sold.

It would cost €3,500 to replace but was worth much more to him personally, he said.

“It was probably an opportunistic theft and we are hoping that those who took the bikes can see now that they can’t get away with it and will drop them off outside a Garda station or somewhere we can reclaim them.

“Certainly we hope to get the message out there so that anyone who is offered these bikes for sale will recognise them and know they are stolen,” he told The Irish Times.

Mr Earley’s bike is of lightweight carbon manufacture and has a well-worn leather saddle. It is painted white and black with red flashes near the pedals.

His friend’s bike is known as a “black cube”.

Both should be readily identifiable if offered for sale. Images of Mr Earley’s bike are available at his Facebook page, entitled Breifne Earley.

Mr Earley was one of four participants in the World Cycle Race who set off from Greenwich outside London on March 1st, 2014. He was the only one to complete the race.

His journey around the world took him through locations including Europe, India, southeast Asia, Australia, New Zealand, the US, Spain, France and the UK. He arrived in London on July 5th for the official end of the World Cycle Race and was crowned winner.