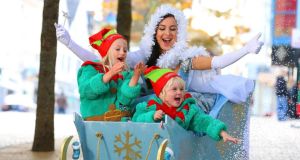 Waterford hopes to double the number of visitors to the city to 500,000 this Christmas for its month-long Winterval festival which was unveiled today by RTÉ children’s TV presenter Megan Cassidy.

The 30-day Winterval festival starts on November 29th when Santa Claus arrives in Waterford aboard a Viking Longboat.

Winterval chairperson Barry Monaghan said the festival is designed to fill a gap for an all-encompassing Christmas festival in Ireland. “The first Winterval last year was a huge success when we had over 250,000 visitors to Waterford city,” he said.

“Independent research was carried out during the 2012 festival and 92 per cent of our visitors said they would return in 2013 so we have worked on improvements with more street entertainment, more evening events and we are extending the festival by five days,” he added.