Details of Woodstown excavation and artefacts contained in new book 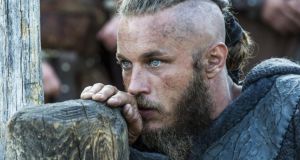 Viking raider Ragnar Lodbrok has been welcomed into the homes of many in the past few years through TV programme Vikings.

Irish audiences may have welcomed Viking raider, Ragnar Lodbrok into their homes over the past year but a generation before the popular TV character set sail for these islands, another group of marauding Vikings were establishing a settlement outside Waterford.

Although Waterford city was established by Vikings in 914, recent excavations on a Viking settlement 9kms upstream of the city at Woodstown have revealed that it was established over half a century earlier by an another party of Norsemen.
And now the results of that excavation have been extensively catalogued in a new book Woodstown: A Viking Age Settlement in Co Waterford which was unveiled ltonight at Waterford Medieval Treasures Museum in Cathedral Square in the city.
The excavations at Woodstownbegan in 2003 as part of the National Roads Authority’s proposed by-pass of Waterford cityby another group of Norsemen. and NRA Senior Archeologist, James Eoghan explained that the Woodstown excavation is highly significant in both Ireland and Europe.
“Although Waterford was founded in 914, the Vikings had begun raiding in Ireland towards the end of the 8th century and there is evidence from the Irish annals of Vikings establishing permanent settlements called Longphoirts in the 9th century,” said Mr Eogan.
“Woodstown is the first of these Longphoirts to be excavated and we can date it to the middle of the 9th century from the artefacts that we found there so it predates the Waterford city settlement by 50 years or more and is a highly signficant archeological site.”
Mr Eogan,who was the executive editor of the new study edited by Ian Russell and Maurice F Hurley, said that Woodstown site covered around 4.5 hectares - roughly twice the size of Croke Park – but so far only 5pc of the site has been excavated.
The route of the Waterford by-pass was diverted and then minister for the environment, heritage and local government Dick Roche signed a preservation order in 2007 so that the remainder of the site is protected for future excavation.
“We found evidence of a significant trading settlement including pieces of silver, amber from the Baltic and even silver coins minted in Iraq at the Woodstown settlement which was proteced by a ditch up to two metres deep with an embankment and palisade on the inside.
“We also found a Viking warrior grave – the soil there is quite acidic so we didn’t find any human remains but we did find a sword, axe head and sharpening stone in the grave which was quite shallow and was just outside the entrance to the settlement.”
According to Mr Eogan, the 400-page book, which is published by Four Courts Press and is accompanied by a free to download audio guide, provides a detailed catalogue of the excavation to date as well as laying the foundation for any future work.