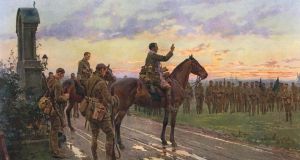 A vestment worn by an Irish priest on the battlefields of the first World War has come to light. The stole, worn by Fr Francis Gleeson, a chaplain to the 2nd Battalion of the Royal Munster Fusiliers regiment, has been located in storage in a museum in London.

Fr Gleeson wearing the stole – a scarf-like vestment worn over the shoulders – was immortalised in the famous “lost” painting, The Last General Absolution of the Munsters at Rue du Bois by the artist Fortunino Matania. The painting depicts the priest, on horseback, blessing Irish soldiers on the eve of the Battle of Aubers Ridge in May 1915.

Research by The Irish Times has revealed the stole, contained in a glazed wooden case, was acquired by the National Army Museum in Chelsea in 1959. It is catalogued as: “Purple silk lined with white, in the form of a continuous ribbon sewn at the edges; either end is a yellow silk fringe; cross pattern sewn onto it”.

Laura Gordon, a spokeswoman for the museum which is devoted to the history of the British army, said the stole cannot currently be seen or photographed as the museum is “closed for redevelopment” until 2016.

The museum also confirmed it did not have the original The Last General Absolution of the Munsters at Rue du Bois painting but has an oil-on-canvas copy, made in 1925, by an unknown artist who signed the picture “A. Thomas”.

It is not known why, or when Fr Francis Gleeson parted with the stole.

Fr Gleeson, born in Templemore, Co Tipperary, and ordained in 1910, was one of 17 Catholic priests who volunteered to serve as chaplains with the British army in 1914. On the day after his “general absolution” at Rue du Bois, the Royal Munster Fusiliers suffered very heavy casualties.

In his diary, Fr Gleeson recalled how after the battle he had “spent all night trying to console, aid and remove the wounded. “It was ghastly to see them lying there in the cold, cheerless outhouses, on bare stretchers with no blankets to cover their freezing limbs”.

He survived the war, returned to Ireland, served as a priest in Dublin and also became a chaplain in the new National Army of the Irish Free State. He was appointed a Canon by the church in 1956, died in 1959, and is buried in Glasnevin Cemetery.

During the memorial Mass on Sunday at Dublin’s Pro-Cathedral for Irishmen who died in the first World War, Archbishop Diarmuid Martin referred in his homily to Fr Gleeson’s diary which “captures in a unique way the bravery of the soldiers he ministered to and what their faith meant to them” and said it “was also a diary which captures the horrors of war”.

The diary, which is in the archive of the Dublin Catholic archdiocese, will be published later this year.