Two Ryanair planes clip each other at Dublin airport

‘It was almost like going over a pothole in a car,’ says passenger 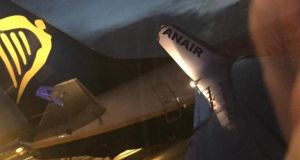 A passenger’s eye view of the damage to two Ryanair planes after a collision at Dublin airport this morning. Photograph: Emily Carroll via Twitter 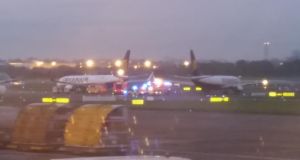 The scene at Dublin airport this morning. Photograph: Don O’Sullivan

Two Ryanair planes clipped each other while taxiing on a runway at Dublin airport this morning.

According to witnesses, there was minor damage to the two Boeing 737 planes.

There were no injuries reported and minor delays to flights.

Ryanair has apologised to customers “for any inconvenience” and reports that normal operations have resumed at Dublin Airport.

Both planes were departing Dublin airport when the collision happened this morning. One of the flights was destined for Edinburgh in Scotland while the other was heading to Charleroi in Belgium.

There were believed to be about 100 passengers on each flight.

All passengers on board the flights were brought to an “airside” building inside the airport on the other side of security.

A statement from the airline said affected passengers boarded two replacement aircrafts for Brussels Charleroi and Edinburgh “later this morning”.

Glenn Jordan, who was flying to Charleroi with his wife, said passengers heard “quite a loud bang” followed by a rocking motion as the flight began taxiing towards the runway.

“It was almost like going over a pothole in a car,” he said. “Then it went silent and the plane rocked for a couple of seconds.”

Delayed at Dublin Airport as 2 Ryanair planes touched wings on the ground. Someone's in a lot of trouble

Despite some initial cries of alarm, Mr Jordan says passengers remained calm. “People were remarkably good natured about it. Some started cracking jokes, they took it in good spirit.”

Mr Jordan says the pilot quickly came on the intercom following the incident to calm passengers and explain the situation. Emergency vehicles arrived at the site soon after, he said.

However, according to Mr Jordan, passengers on board the Charleroi flight had to wait over an hour before disembarking and returning to the Dublin airport terminal building. “It took about an hour to get us off the plane, even though they kept saying 5/10 minutes. I think they cleared the other plane first.”

In the meantime, Mr Jordan said he was celebrating his birthday over a Burger King breakfast courtesy of the €5 Ryanair food vouchers that were handed out to passengers.

Andrea Cunningham, who was on board the Edinburgh flight, told RTÉ that passengers were made wait on the plane “for about an hour” before being brought back into the airport terminal.

Ms Cunningham, who was flying to Scotland to attend a job interview in Aberdeen this afternoon, said the plane turned the corner and “hit the wing” of another plane.

“It wasn’t a huge impact to be honest, but you could feel the plane tug and then we kind of just stopped.”

A Ryanair spokesman said: “Two of our aircraft were taxiing slowly to the runway at Dublin Airport this morning. The winglet of one aircraft appears to have scraped the tail of the other.

“Both aircraft were under the instruction of Dublin Airport Air Traffic Control at the time. There was no impact on customers on board and Ryanair contacted the [Irish Aviation Authority] and worked with them to return both aircraft to stand.

“Affected customers disembarked, were provided with refreshment vouchers and boarded two replacement aircraft, which departed to Brussels Charleroi and Edinburgh later this morning.

“Ryanair apologises sincerely to customers for any inconvenience. Both aircraft are being repaired by Ryanair engineers and will be returned to service shortly.”

A statement from the Irish Aviation Authority confirmed that two planes were involved in the incident and that emergency services had attended the scene.

“The Air Accident Investigation Unit (AAIU) of the Department of Transport, Tourism and Sport has been notified and will conduct a further investigation,” the IAA said.

“Dublin Airport is now fully operational, although passengers may anticipate some delays as a result of this morning’s incident and are asked to check with their airlines directly for further information.”

A spokeswoman for Dublin airport said two Ryanair flights had “clipped one another” in a taxiway area.

She said the airport remained fully operational and that there were only “minor delays” in the wake of the incident.