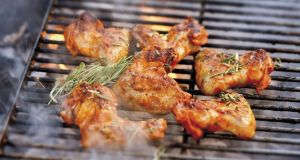 Three sisters were burned, two badly, at a family barbecue in Ardagh, Co Limerick, when a gust of wind caught the flames. File photograph: Getty Images

A mother is in a critical condition in hospital after being engulfed in flames at a family barbecue.

Joanne McMahon (46), from Castlemahon, Co Limerick, was at a family Confirmation after-party in Ardagh, Co Limerick, when the barbecue suddenly exploded into a ball of fire in her face. “She swallowed the flames. It was horrific,” a garda said.

Ms McMahon’s sisters Noelle Collum and Mary Griffin, aged in their 40s, were also burned in the fireball. Two children attending the party were taken to University Hospital Limerick but were discharged having sustained minor injuries.

Ms McMahon, who sustained the most serious burns, and Ms Collum are being treated at St James’s Hospital in Dublin.

They were transferred there after firstly being treated at Cork University Hospital. Ms McMahon is said to have sustained around 60 per cent burns to her upper body.

It is believed a gust of wind caught flames from the barbecue which were thrown back onto Ms McMahon’s head. Her mother, a retired nurse, ran to douse the flames at her daughter’s face and hair and applied wet towels to the affected area.

Gardaí and the fire service were called to the scene, at the home of local butcher Tom Griffin, at Dunganville, Ardagh.

A helicopter air ambulance landed at the house within minutes of the incident and airlifted Ms McMahon to Cork University Hospital’s burn unit. “They are in a serious condition,” said a hospital source.

The incident occurred last Friday afternoon just as the family was celebrating the start of the June bank holiday weekend.

A large gathering of the sisters’ three families were also celebrating the Confirmation of a number of their children. “They were at a family barbecue and she [Ms McMahon] got burned there... It was horrific,” said a garda.

He added: “[Ms McMahon] got burnt down her throat and everything. She swallowed the flames. It’s a terrible tragedy.”

Two gardaí who were dispatched to the scene are said to be traumatised. “The two [gardaí] went down and the air ambulance was down for her. It was all very quick. The [gardaí] had to go home after it,” the garda said.

Rev James Bluett, Newcastle West, said: “Prayers will be said in all surrounding parishes [for the family]. There would be Masses offered as well.”

A local man who did not want to be named said the sisters all have young families. “In time I hope she [Joanne] will make a recovery, the poor thing. They are a very nice family. It’s very very sad. Tom Griffin is a great butcher and one of the nicest men you’d meet. We are all just praying for the families involved.”

In another incident last Friday, a man was engulfed in barbecue fluid when a barbecue exploded at a family wedding reception in Enniskillen. Guests brought the man screaming in pain to a bathroom and covered him in wet towels.

The man was taken by ambulance to hospital for first degree burns, similar to severe sun burn. He is expected to make a full recovery.

Boy (15) stabbed during row between gangs of youths in Dublin 11:38
Election 2020 outtakes: Campaigner for Timmy Dooley has car stolen 11:26
Sable kept as pet in Co Cork found to have rabies-like virus 10:45
Bodies of three young children found in house in Dublin 12:19
Boy (17) dies and three others injured in Dublin car crash 09:42