Theresa Villiers to remain secretary of state for North

David Cameron tweets confirmation that minister will continue in her position 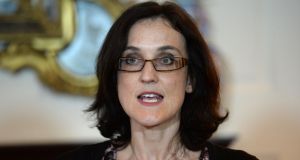 Her chief and most immediate task when she returns to Hillsborough Castle will be to try to devise a strategy that prevents the collapse of the Northern Executive and Assembly.

Stormont politics are currently deadlocked over Sinn Féin’s refusal to sign up to the British government’s proposals on welfare reform. If the stand-off is not broken there is a real possibility that the Stormont institutions won’t be able to function, which could precipitate a return to direct rule from Westminster.

At the weekend, Ms Villiers called on politicians in the North to press ahead with the Stormont House Agreement, which was agreed at Christmas but which Sinn Féin subsequently reneged from, claiming it had been duped on the welfare proposals.

Ms Villiers said the Stormont House Agreement contained a generous financial package and should be implemented.

Theresa Villiers was appointed as Northern secretary in September 2012. She took over from Owen Paterson, following a cabinet reshuffle by David Cameron.

She was previously an MEP and a Conservative MP for Chipping Barnet. She also worked as a barrister.

Ms Villiers stated over the weekend that she would be “happy” to keep the position.

“It is a fascinating job. I think it has gone well. I would be happy to do it, or any other role.”