The ‘true’ republicans: ‘Nothing since 1919 is legitimate’ 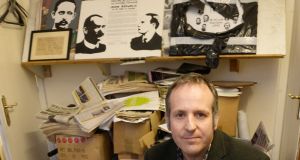 The rooms in Republican Sinn Féin’s offices on Parnell Street in Dublin are filled with a chaotic clutter, a mass of agitprop paraphernalia stuffed into cardboard boxes piled high on every available surface.

Named after Dáithí Ó Conaill, a former chief of staff of the IRA , it is one of the few inhabited buildings in a triangle of largely derelict wasteland at the junction of Capel Street, Parnell Street and Ryder’s Row.

The walls are covered with images of RSF heroes – Máire Drumm, the Sinn Féin activist famed for her inflammatory speeches, later shot dead in her hospital bed by Loyalists or Michael Gaughan, the IRA bank robber who died on hunger strike in Britain in 1974.

The image of Ó Conaill, who was later vice-president of RSF and died in 1991, is on the wall, too. Each year since, he has been commemorated at Glasnevin Cemetery. A small crowd comes. More famous men who went out on Easter morn’ a century ago, such as Pearse and Connolly, will be honoured today in the same graveyard. The crowd will be large.

This weekend, groups such as RSF, the 32 County Sovereignty Movement, Éirigí – splits and divisions are a feature of Republican history – will watch official commemorations with a mixture of contempt and resentment.

“The State is trying to dilute 1916, to turn it into some kind of history-fest,” says Dalton of RSF. “It is like taking the best china down off the press, dusting it off, admiring it and then putting it back up so we can ignore it for another 100 years.”

For republicans such as Dalton, everything since the Proclamation was read by Pearse on Easter Monday, bar Sinn Féin’s 1918 Dáil landslide and the meeting of the first Dáil in the Mansion House on January 21st 1919, is illegitimate.

The list of illegitimacy includes the December 1921 Anglo-Irish Treaty with Britain; its January 1922 ratification by the second Dáil, along with the Government of Ireland Act which legislated for separation from Britain and the creation of Northern Ireland.

Equally, Ireland’s membership to the then European Economic Community in January 1973, and the simultaneous referenda held North and South in May 1998 to ratify the Belfast Agreement, have no standing.

Similarly, the logic continues, every law enacted by the Oireachtas, the president, the courts, the Garda Síochána, the Defence Forces, all public servants – all count for nothing because all are illegitimate.

It took Eamonn de Valera four years from the establishment of the Irish Free State in December 1922 to recognise the dead-end nature of such a position, one he abandoned when he created Fianna Fáil.

The differences between dissident groups can appear as arcane to outsiders as the causes of a family rift. However, they are keenly felt. Most importantly, the term “dissident” is not accepted by those to whom it is applied.

Instead they see themselves as the true republicans, the keepers of the flame as it were – in contrast, as they have it, to Sinn Féin, whose members and supporters are seen as traitors, just as much, if not more than others who left behind the tenets of the faith decades earlier.

Republican Sinn Féin emerged in 1986 when Sinn Féin split over abstentionism. The bulk of the party under Gerry Adams decided to participate in the Dáil; the minority, under Ruairí Ó Brádaigh, did not.

“We uphold the right, as of all peoples, to defend their national territory from foreign invasion or aggression,” says Dalton. “Whether people like it or not, as long as there is a British presence in Ireland, there will always be some form of an IRA to oppose it.”

The contempt for official 1916 commemorations is shared by Francis Mackey of the 32 County Sovereignty Movement: “Sovereignty is still being denied to the people of the Six Counties,” he declares.

The 32CSM was founded in early 1996 by, among others, Bernadette McKevitt, sister of the IRA hunger striker Bobby Sands, after Sinn Féin signed up to Mitchell Principles disavowing the use of violence to achieve political ends.

In August 1998, the so-called Real IRA, to which the 32CSM is linked, committed the single largest atrocity of the Troubles when a car bomb exploded in Omagh, killing 31 people, among them a pregnant woman, six children, and six teenagers, and wounding 220 others.

Mackey, a former councillor for Sinn Féin, denies that links exist between the 32CSM and the Real IRA: “We don’t have an IRA and that’s one of our strengths. We believe in a democratic body that will give leadership to the republic.

“It is inevitable that those groups will exist in the absence of dealing with the issue of sovereignty.”

Militant republicanism is an inevitable consequence if the alternative, a peaceful solution, does not exist, he goes on.

Firstly, Mackey says the Rising commemorations should have been held on a 32-county basis: “Whose responsibility was it to distribute proclamations and flags to the schools in the six counties?” he asks.

If the 32CSM was running the centenary, there would be “a commemoration, first of all, for those who gave their lives, a remembrance of everything that has happened since, a call for the unification of our country”.

None of the groups accept the May 22nd, 1998, decision of the electorate, North and South, to support the Belfast Agreement – by 71 per cent in Northern Ireland and 94 per cent in the Republic.

For Dalton, the result of the 1918 election still stands and national freedom cannot, in any case, ever be subservient to democracy. Legitimacy does not come from the ballot box, he tells The Irish Times.

Evoking Pearse’s Proclamation reference to “the dead generations”, he goes on: “Legitimacy comes from adhering to the republican position which has always been the right of Ireland as a nation to determine its own future.

He adds: “Ireland’s right to national freedom and independence is actually not a matter of a vote for any single generation but in terms of even allowing the Irish people to express a view, acting as a unit, that was denied and certainly wasn’t answered in 1998.”

The Proclamation should be embedded in the school curriculum and the Rising should be marked annually, with full pomp and ceremony in the fashion of the Fourth of July in the United States, or Bastille Day in France, he believes.

Fine Gael and Labour, he goes on, were able over the last few years “to send water bills to every house in the country; could they not have sent the Proclamation to every house, and in the North too?”.

1 Why Sinn Féin will not call the State by its name
2 McDonald rejects idea SF public meetings ‘an affront to democracy’
3 Coronavirus: Irish citizens advised not to travel to Italy’s affected areas
4 Maureen Dowd: For the White House parasite, all restraint has gone
5 Brazilian family ‘so happy’ after father facing deportation is released
Real news has value SUBSCRIBE