The Question: Should male tennis players be paid more than women?

As Indian Wells tournament boss Raymond Moore resigns, what of his comments? 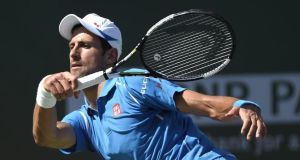 Novak Djokovic: talked himself into a world of pain. Photograph: Daniel Murphy/EPA

Tennis has been enduring quite the annus horribilis: allegations of match fixing were followed by Maria Sharapova’s positive drug test. Suddenly the entire sport, which had previously avoided the scandal that cycling and athletics had faced, was looking rather tarnished.

And then this week an entirely unnecessary civil war broke out about equal pay for the game’s top men and women players.

It started when the chief executive and director of the Indian Wells tournament, in California, Raymond Moore, said, “If I were a lady player I’d go down every night on my knees and thank God that Roger Federer and Rafa Nadal were born, because they have carried this sport.”

Moore spectacularly failed to appreciate that it is administrators and mandarins like him who have most to thank the sport’s leading stars of both sexes for. In the uproar Moore was forced to resign.

But not before Novak Djokovic, after winning the tournament, talked himself into a world of pain. “I think that our men’s tennis world . . . should fight for more, because the stats are showing that we have much more spectators on the men’s tennis matches.”

The arguments often cited for unequal pay – that men play longer matches and attract larger audiences – can sound convincing at first but really exist only as an excuse for institutionalised gender-based inequality.

After all, there was a spell in the late 1990s and early 2000s when the women’s game was a superior spectacle, the men’s game reduced to a numbing service shoot-out because of faster balls and surfaces. Should the men have taken a pay cut until they served up proper entertainment rather than ace after unreturnable ace?

To pit one against the other is something the sport can ill afford to do at this time of crisis.