Taoiseach Enda Kenny reacts to the Government's defeat on the proposal to abolish the Seanad. 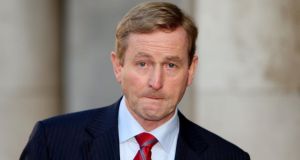 Taoiseach Enda Kenny: “Referendums are the ultimate exercise in democracy when the people are asked themselves to make decisions on constitutional issues.” Photograph: Niall Carson/PA Wire

Taoiseach Enda Kenny has said he is “personally disappointed” at the defeat of the Seanad abolition referendum but that he accepts the result.

Speaking at Dublin Castle yesterday evening after the result was declared, Mr Kenny said he would now reflect on the outcome and consider how the Seanad could be made an “effective contributor” to the changes the Government is seeking to make to the political system.

The referendum was defeated by 42,500 votes. The unlikely result was announced at Dublin Castle at 4.20pm by national returning officer Riona Ni Fhlanghaile. Some 51.8 per cent of the electorate has rejected the proposition to scrap the Upper House with 48.2 per cent voting in favour.

“The people decided Seanad Éireann should be retained, naturally I was personally disappointed but I fully respect and accept the outcome,” he said. “Sometimes in politics you get a wallop in the electoral process, I accept the verdict of the people.”

The Taoiseach said it was too early to say what the Government might do in respect of Seanad reform, but that he would consider putting it to the Constitution Convention. He said he had seen a range of proposals but that these would likely require another referendum.

Mr Kenny said he made a pledge to put the issue of the Seanad to the public some four years ago and that he had made good on his word. He said a process of change in politics will continue and “it’s important to assess how best the Senate can contribute to that process of reform”

The Taoiseach said the referendum on the court of appeal would be carried, and that the court would greatly “improve the efficiency” of the courts system. The result of that referendum has not been officially announced.

“Referendums are the ultimate exercise in democracy when the people are asked themselves to make decisions on constitutional issues,” he said.

Asked what went wrong in the Yes campaign and if he had played enough of a role, Mr Kenny replied that it was “not about parties or leaders or government” but rather the people.

He said he had debated the matter in the Dáil, spoken to the media about it, answered questions on the subject “here, there and everywhere” and attended public meetings.

“People would love to have had a shouting match between party political leaders but that never applied in referenda as it’s not a party political issue, it is a people issue,” he said, in reference to his decision not to take part in a televised debate.

Tánaiste Eamon Gilmore said he was “not disappointed” as the result of the Seanad referendum was a “decision of the people”.

He said the reform of the Upper House will be discussed more fully now the campaign is over.

Mr Gilmore said a distinction would have to be made if the Seanad could be reformed in the existing constitutional framework or if a constitutional change was needed.

He said the Constitutional Convention would be an option for considering how to proceed with the Seanad but that the matter would also be considered in the Upper House, the Dail and by the public.

Mr Gilmore said the Seanad referendum would not be put to the public again as was the case following the rejection of the Nice and Lisbon treaties.

“It’s not the same as some complicated European Treaty which requires a lot of explanation and examination,” he said.

“This was a straight Yes or No, are we going to have one parliamentary chamber or two.”