St Patrick’s Festival will go ahead despite Luas strike – organisers 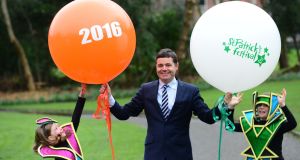 Organisers of this year’s St Patrick Festival have said that the four day city-wide event will go ahead despite the scheduled Luas strike on March 17th.

Speaking at the festival’s launch on Wednesday, Susan Kirby, CEO of St Patrick’s Festival said the Luas stoppage “will have an impact but the festival will go ahead. We will continue to liaise with other agencies to bring all of the audiences into the festival”.

Minister for Transport, Tourism and Sport Paschal Donohoe said that the recent gangland killings should not deter people from visiting the capital for the events.

“Despite the awful murders that took place in our city, Dublin is a safe and vibrant city and if you want the best opportunity to sample all that our city has to offer across the days, come to the Patrick’s festival,” he said.

Now in its 21st year, the festival runs from March 17th to 20th and organisers have promised a world class line-up of events and street theatre from céilís to treasure hunts and a series of cultural programmes.

Events have been planned to cater for young and old with the “I Love My City” programme offering a variety of events from spoken word to film screenings, street theatre, treasure hunts and alternative tours of Dublin.

Working with the festival’s theme of “Imagine If”, the Children’s Soapbox will give a platform to young Dubliners to express their hopes for the Ireland of the future. They will deliver their views in a soap-box style using spoken word, stories and poetry.

An open mic storytelling competition will also run during the festival. Participants will be chosen at random to tell a story on the spot on the night’s chosen theme.

Emerging Irish and international artists from a number of disciplines including literature, music, film and design will also feature during the festival in various locations throughout the city.

The stars of the Older than Ireland documentary will take part in a Q and A following a free screening of the film in the National Gallery.

Another highlight of the festival is The Ultimate Sunday where the weekend’s papers are brought to life through a series of talks, interviews and live music.

Launching the 2016 programme Minister for Transport, Tourism and Sport Paschal Donohoe said, “We look forward to another successful week this year and I am sure that all who attend, from home and abroad, will thoroughly enjoy themselves.”

A full line up of events is available at www.stpatricksfestival.ie.