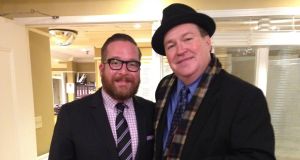 Joe Crowley (right) a survivor of clerical abuse, and Michael Cyril Creighton, the actor who portrays him in ‘Spotlight’.

The idea of journalism being cinematic is counterintuitive. Rather than being visually appealing, the craft of journalism is more in keeping with Bismarck’s observation that anyone fond of sausages and legislation should avoid watching them being made.

But Tom McCarthy’s Spotlight, which chronicles The Boston Globe’s Pulitzer Prize-winning investigation of the Catholic Church’s cover-up of clerical child sexual abuse, turns that idea on its head. It bestows an understated nobility on those who practice the mundane, maddening and sometimes mind-numbing craft of investigative journalism.

McCarthy’s film, which opens in Irish cinemas in January 2016, has been a hit at film festivals from Venice to Toronto. It has received more critical acclaim than any film about journalism since Alan J Pakula’s 1976 offering All The President’s Men on the scandal that brought down Richard Nixon.

Spotlight focuses on four members of the Globe’s Spotlight Team, the specialised unit that spends months on investigative series, and how in January of 2002 it came to produce the first story about the way the Archdiocese of Boston, led by Cardinal Bernard Law, had protected priests who sexually abused young people.

The cultural deference to the church in Boston, since the 19th century the most Catholic and most Irish of major American cities, made taking it on a daunting task.

There is a striking authenticity to the film. Michael Keaton, who portrays Spotlight Team leader Robinson, sounds just like Robby when he answers the phone. Mark Ruffalo captures Rezendes’ intensity. Brian d’Arcy James demonstrates Carroll’s nerdy skills as a data-driven reporter. John Slattery is a convincing Ben Bradlee Jr, the overseeing editor of the investigation. His father Ben Bradlee Sr was the editor of the Washington Post when its investigation of the Watergate scandal became the basis for All The President’s Men.

As Marty Baron, Liev Schreiber shows the doggedness of the Globe’s editor-in-chief. The film shows how Baron’s outsider status in parochial Boston emboldened him to take on the Archdiocese.

Baron, a Jew, was the first editor of the Globe who was neither a Christian nor from Boston. Having worked in Florida, which has the most transparent public records law in the US, he could not understand how church lawyers could settle cases out of the public eye while using public courts. So he decided to sue the church for the court records.

The archdiocese’s own records indisputably showed that the church was more interested in protecting its reputation than the wellbeing of abused children.

Cardinal Law resigned in late 2002, not in a fit of conscience, but after it became clear to the Vatican that his position was untenable.

Many churchgoers were withholding contributions for the church’s upkeep and good works as long as Law remained.

Law’s successor, Cardinal Sean O’Malley, was chosen to replace him precisely because he had proved adept at succeeding bishops who had been tarnished by abuse scandals. Within a few years, O’Malley closed or consolidated almost a third of the archdiocese’s parishes to pay for settlements.

While much of the publicity and buzz has been about how well the film captures the nuance of journalism, it also humanises the survivors of clerical abuse who helped drive the Globe’s coverage.

One man given his due is Phil Saviano, an abuse survivor who toiled for years trying to get the media to treat the scandal not as the individual failings of abusive priests but a conspiracy of silence by bishops and the complicity of the Vatican.

And Joe Crowley, abused as a teenager by Rev Paul Shanley, is played with aching authenticity by Michael Cyril Creighton.

After the Boston premiere of the film, Crowley and I talked for two hours about this film, and others. Crowley knows more about film than anyone I know.

But even he was not especially keen to discuss the film as art, or the way it captured the less than exciting craft of day-to-day journalism. To him, the film felt less like cinema and more like vindication, for him and so many others who finally found their voices.

Kevin Cullen, a Boston Globe columnist, was a member of the newspaper’s investigative team that won the 2003 Pulitzer Prize for Public Service for exposing the cover-up of sexual abuse by priests.